2010 Poker Academy Meet Up in Vegas

Things got off to a slow start for the Poker Academy group as a group, but I can’t say many of us have stood still long. We did have one member who arrived ill, who I have since learned is feeling much better this morning via a phone call that under other circumstances would have been to remind someone that it was time for the cow’s morning milking.

Although I have not been to Vegas in two years, it all came back to me quickly, the forty-five minute wait in a half-mile long line for a cab, the wide assortment of folks from all points from Arkansas to Albania, the oxygen-tanked keno players, MILFs with bolt-ons,young boys selling their mouth, and low rollers looking for an angle appropriate to their pimped-up attitude. Perhaps I am being too harsh, and there are certainly others who write about this city who write about the underbelly and liposuction better than I. However, my tongue always goes to the sore tooth.

And, as seems to be a Las Vegas ritual for me, although I was the PA Meet-Up organizer, when I arrived at the inn, the was no room in my name. Of course, I do not mean to imply that I should be represented in frescoes with a halo over my head, but I do have a nice view of duct work and the variety of items that those in higher rooms discharge from their windows onto the roof just outside my window.

Moving on to the fun parts.

The first night found the bulk of us at Harrah’s poker room for a friendly 1/2 game. Friendly, because there was so little activity, they sat us all at the same table. There were a couple strangers at the table who played a fairly loose and aggressive game, and members of our group eventually benefitted from this. For my part, I was either card dead or blown off pocket pairs both large and small and retired early, before the game got good, so I will let the others tell their stories if and when they see fit. I will say that Crash was on fire late in the session.

Much of the discussion has been over where we should play. We wanted softer rooms that would fit both those of us who have played live for a while, and those who have less experience. First on the list was Bally’s, so we hit that room after Cat Balou busted out of the 11:00 tourney at Harrah’s Tuesday morning. Pokergirl was already there and had informed us that it was a good choice. There were enough tables running so that there was typically only two or three of us a any one table, which was a much better situation for us as we didn’t feel so much like kissing cousins, if you get my drift. I, for one, don’t particularly like playing with a bunch of friends when other options are available.

Again, I can’t say that I had a stellar performance, and there certainly are not any memorable hands, except one, perhaps when I limped with A9c from early position and saw a cheap flop. CK knows what happened because I had Pokergirl tweet her. I turned the flush and was pretty damn sure the guy to my right had a smaller flush. I managed to keep another player in by smooth calling his bet, but I had to slow down when the board paired on the river. Nevertheless, it was my biggest win so far. I managed to leave with a small profit. Again, I will let others tell their stories.

Because I know my organizational skills are limited, when I chose to take on the task of arranging this year’s Meet Up, I kept things simple: block off some rooms, reserve a table for fifteen for dinner and schedule a little tourney for iur group. Tuesday evening was the dinner at Flavors Buffet at Harrah’s. All but one of our group was able to make the dinner, and we had two guests: a friend of mine from my days in Chicago (another post at a later date) and Pokergirl’s friend, Poker Grump. It was great to have nearly the whole group together for a decent meal and great conversation. It was here that we toasted, shared stories about, and set a place for our dear friend, Ben Kramer.

Opinh Bombay was first with an Air Force toast for our friend who has gone before, Pokergirl shared her memories of first meeting Ben and subsequent visits with him and his family, Sandman could be heard reminiscing at the other end of the table, and I told my tale of when I tried to play Yenta (unsuccessfully) for Ben and a friend of DW in Chicago. They were stories we had told before, but they brought Ben to the table for us, and that is important. Some of the newer players had never played poker with Ben on PA, and there were those who had but had never met him, yet by the end, all knew how special he was to us lucky ones. 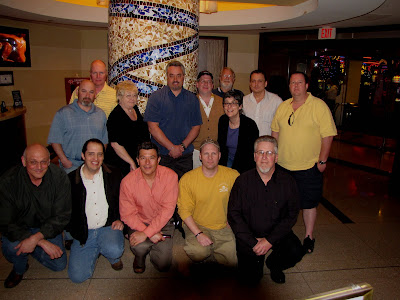 Of course, after dinner we had to decide where we would go for some more poker. My friend from Chicago told us that there was a beer distributor convention at Mandaly Bay, and we set out en masse with aspirations to take the pennies of some drunks.
After a monorail ride to MGM, we walked the rest of the way to MB. It was a hoof, but I’d venture to say that most of us could use the fresh air, and it was a nice warm evening.
The trouble with ten or twelve friends showing up at a poker room all at the same time is that the room sees an opportunity to start a new table. A few of us were fortunate enough to get seats at tables already underway, but the rest of us were sat at a ‘must-move’ table with three strangers. We bided our time while a local basically ran over the table, and waited to be moved. Instead, they started a new ‘must move’ table, which sucked. I was fortunate to ask about a table change at the same time a young fellow from another table wanted to move, so we changed places. A set of fours did me well, and again, I called it an early evening. I have since heard the Mad Mosby did well for himself in the wee hours.
Wednesday’s tourney started at noon. It was a $60 buy-in with a $40 add-on. Now, here is where we wanted the whole group at the same table. I dare say everyone had a great time. At Cat Balou’s suggestion, people brought card protectors to exchange, and a couple players went out of their way with the idea. Opinh Bombay had 11g poker chips made with the PA logo imprinted and distributed them to the group, and everyone also received protectors that Gustifer crafted out of fishing bobbers and chips.
The tourney itself has pretty steep blinds after level five, yet we had plenty of time to chat, and jocularity ensued before it became a jamfest. Uncle Trick (UT) bubbled, Sandman took third, Cat Balou finished second and KevinB68 too it down. There was over $1000 in the prize pool. 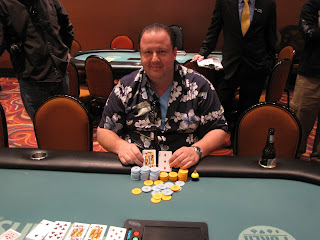 KevinB68 with the ever-deadly K3 off.

After the tourney, everyone went their separate ways. Some went to the Mirage, others to the bar, a couple opted for naps before returning to the tables for the night, and I wanted to get a post out before I forgot any more of what has gone down.

Before I close, I want to give a shout out to a couple folks: First, I’d like to say hello to Bricks from PAO. You are missed, girl and hope that next year we will see you at the tables (and I missed on your prediction); also, I’d like to thank Shawn from Poker Academy’s support and development team for finding $500 to put toward the Meet Up. Dinner was on PA and we even had a little left over to sweeten the pot for the tourney finalists.

I would also like to say that I am working on my new laptop, which is a Windows based bugger. I have tons of photos that I don't have the patience to post at this time because I'd have to bother to learn this non-intuitive and intrusive software. When I get home next Sunday and back to my Mac, there will be much more.
Posted by bastinptc at 4:29 PM

great time, met great people. will put in my share when i get back to my computer.

Looks like a blast. Again, I appreciate the invite. Maybe when my finances are straighter next year--if you do this yearly--I will come along if invited again.

Hope you all crush them!

Great write-up and thx for the photos!

sorry i had my moment of lucidity