I have been threatening for a couple days now to start processing our dried and cured garlic. I harvested it several months ago, put it in the barn and forgot about it. Well, it wasn’t exactly forgotten. I just knew there wasn’t any rush to putting it away for the winter.

Last fall we planted four, forty-foot rows of a garlic variety know to us as Mexican Roja. We acquired it from our dear friends at Persephone, a rather successful organic farm about twenty miles to our south. (Don’t bother looking for a website. Persephone didn’t have a computer until this last year, and I doubt very much that they have email.) It was the second year in a row we had planted this type. The harvests couldn’t be more different.

Two years ago we bartered for ten pounds of “seed” garlic (garlic cloves are planted to produce new plants and the segmented root bulb), for which Persephone received five pounds of ground cherries (an old-timer fruit of sorts, a relative to the tomato and tomatillo, and has an familiar yet indescribable flavor). We broke up the bulbs and planted only the largest cloves. Small cloves are eaten; big cloves are planted and produce big plants.

And big plants they were. The bulbs were huge, flavorful and with just a hint of heat. We sold the bulk of the harvest to a local organic grocer.

One day, my dear wife was making a delivery of herbs, veggies and garlic to that store. The produce manager introduced DW to another grower, in fact the primary garlic grower for the region. When she discovered that the Mexican Roja was ours, she got down on her knees and did the hands-over-head-hail-Great-One-wave toward the DW.

We sold out of our Roja that first year, as our clients could not get enough of it. The stuff flew off of the shelf and we made a pretty penny. Our only regret was that we wished we had grown more…much more, as we had none left for ourselves or for planting the next year. As for the first problem, it wasn’t really an issue because we had planted an equal amount of California White, a more standard variety of garlic, not dissimilar to what one generally finds in a grocery store. At the time, we weren’t overly concerned about not having kept back some seed, for we knew where we could get more.

Except we didn’t call Persephone in time to place an order. All they could offer us was the cloves left over, the ones that get eaten, and even then, the pickings were mighty slim. Yet, so happy with the variety of garlic itself, we took what we could get and bartered with Jerusalem artichokes. I planted everything they gave us, every little sliver, and waited.

The garlic plants this year were an odd lot. Some grew scapes (flower heads), which none had the year before. Some grew auxiliary cloves on the stem, which effectively made the cloves below-ground small. Despite these irregularities, we managed about one half of a bushel of garlic, none of which will be sold. Some will be gifted, much will be eaten by us, and the biggest cloves will be planted tomorrow. Next year…

That is the farmer’s mantra: Next year. 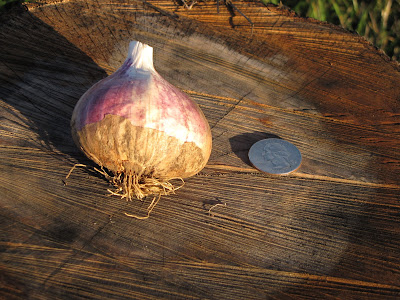 This is a respectable sized garlic bulb. Note the purple skin. Once this is peeled away, lower skins are white, and the clove itself has a slight yellow cast. 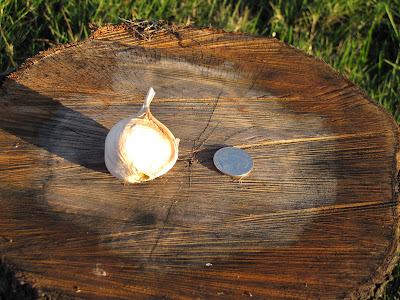 A clove suitable for planting. Yeah, that's a quarter. Next year's bulbs should be 50% larger than the one in the first picture. 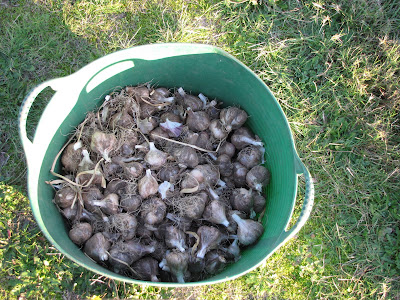 The bounty. I'm guessing about 25 pounds from 4 pounds of seed.
Posted by bastinptc at 11:00 PM

The quarter is excellent to give me a perspective for size. Thank you.

I hope you don't mind if I mention something about memory cards in your new camera. Instead of just deleting photos (after you've transferred them to your computer), you should occasionally (some do it each time) reformat your storage card. It's like your computer hard drive -- it gets fragmented.

Thanks Mojo. I read that in the instruction book. I will will make sure to do it.