For this one I have to pour a scotch first. Set the mood for myself. On the other hand, I’m not so certain that my little corner of the blogosphere is entirely appropriate for the topic below. Yet, I’ve pretty much established that I write about more than poker, as life tends to intercede and I react similarly, whether in poker or life, by wanting to write about it.

Dear Wife’s grandmother… what a character. I can describe her in four words: tough old Hollywood dame. Yet she’s much more colorful and deserves more, much more than I will deliver in a lengthier description.

Grand Mama was born and raised in Beverly Hills. She married a film industry exec, divorced, and married DW’s grandfather, so, she’s a step-grandmother. From what I gather, the two of them traveled and boozed up the world. She’s 84 years old, dyes her hair red, wears immaculate fashions from the 60s, subscribes to “W” and “Vanity Fair”, is involved in charities and a garden club, adheres to a vodka martini, lemon twist, cocktail hour that turns into an evening, and chain smokes Pall Mall straights with a cigarette holder. In her slow, raspy voice she proclaims, “It’s the filters that give you cancer, sweetie.”

She and DW were out to lunch one day and GM had to use the restroom. DW asked the waiter where the restroom was. The restaurant had a film theme and he replied that she should go through the door with a picture of Greta Garbo on it. “Honey, I knew Greta Garbo.”

She’s like that, and I love this woman for that quality. I can’t say everyone holds her so dear. For some reason, others can’t see the love that hides, rather unsuccessfully, behind her very hard exterior. I can see it in her eyes. They shine with it. We are having drinks and a smoke. I am sitting across the table from her. Other family members are there, chatting away while she and I are quietly listening. Our eyes meet, she smiles and says, “You hold your cigarette like a homosexual.” Then she throws me a kiss. I have come to the conclusion that this is how she flirts with me.

Or, perhaps I am a glutton for punishment. The trick is to give her a little shit right back, but in a manner where she maintains the upper hand. After all, she is the matriarch. A couple weeks ago, before our trip, I spoke with her on the phone and warned her about my hair. When I was growing my hair out and was starting to get some length to it, she asked, “Why do you want to look like Nick Nolte?’ And a little while later, “You do have gorgeous hair.”

Now it’s considerably longer. “You’re not going to cut it before I see you?”

“I will afterwards. I just want to irritate you a bit first. Then I will give it to Locks of Love.”

“Well, that’s very sweet of you, but what use will they have with all of that gray?”

She was at Thanksgiving dinner. DW went to fetch her. (DW loves her as much as I do, yet doesn’t catch near the amount of flack.) As anticipated, she despised my hair. “What exactly are you trying to prove with this current visaaaage, my Dear? You look like… well, you look like an old hippie. And that beard… My lord. Christmas has come early.”

After dinner, she wanted to leave, as her dog would have to go out. We both drove her home, and as usual, we sat and talked for a while. Eventually the conversation turned to her health. She tells us a story about going through menopause. The medication she had been taking for hot flashes had been discontinued, and she began to feel odd without the meds. Her doctor said that hse was going through withdrawls, and prescribed a substitute. She went into the bathroom to fetch the bottle. It was phenobarbitol. Downers. “But it didn’t do anything, so I quit taking it.”

Despite her spunk, she is frail. While she still drives, she has a difficult time with stairs. Last year, after a fall, the family was prompted to get her a Medic Alert system.

“It’s around here somewhere. I don’t use it.”

“What if you fall again?”

Again, with a smile, “Dear, when I go it will be with a bottle of vodka and a dry cleaning bag.”

Neither DW nor I quite knew how to respond, but she was looking for a reaction, so I gave her one. I stroked her face with the back of my fingers and replied, “You are an extraordinary woman. Take the phenobarb at the same time. Do a Marilyn.”

Over the last 15 years or so, DW’s younger brother (my poker buddy) has been GM’s primary overseer. When we had a moment alone, I began to tell him what she had said, but before I could get it all out, he repeated it verbatim. “She’s been saying that for years.”

Her life lost much of its purpose when her husband died. She talks about him quite a bit, and although he has been dead for many, many years, she still refers to herself as Mrs. F. R., even using his name for her mail delivery. Her dedication is not dead, and may in fact be her primary purpose to continue, that and giving family members grief. She will be with us for some time.

Land developers would not wish the same for her. Her house is one of the few older homes left on her street, and when it goes, two small, yet not insignificant parts of Hollywood history will have disappeared. Have a look for your self to see what is replacing those already gone. The movie set has moved off of the soundstage.

“Dear, they can have it. It’s all going to come sliding down the hill someday anyway.” 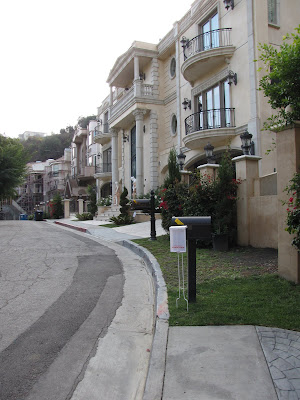 This is all new construction, done over the last four years or so. 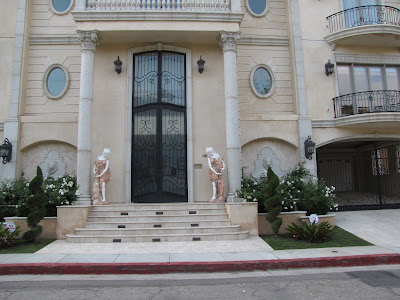 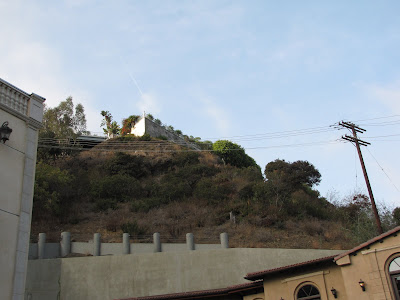 The pylons in the wall are supposedly set 40 feet in the ground. Will they be enough when the Big One comes? Note that there is another residence on top of the hill. 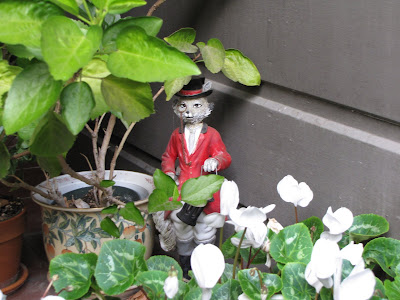 This figurine is on Grand Mama's porch. It works for me.
Posted by bastinptc at 12:46 AM

“It’s the filters that give you cancer, sweetie.”

This line is a classic!

Also, thanks for the photos. I don't know why more bloggers don't do them.