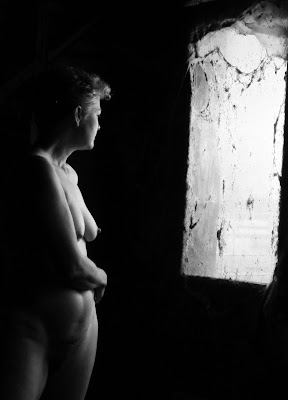 Part one, or rather, the first session is in the can. There is still another part to the assignment, to do another session with a different subject. In that finding one model was difficult enough, I think it will involve yours truly. Fair warning. I may, however, be forced to rest on my laurels and suggest earlier works for consideration.
So, what is the difference between nude and naked? I can’t exactly say at the moment, but I do have a gut feeling about what category each of my photos falls into. For the most part, I was doing both with this first session. The first few are nudes and the latter are naked. Why? Because there is much more going on in the naked pictures, vignettes of a inappropriate setting where one is less likely to see a person without clothes. They are still about the body, but the body is out of an anticipatable context. Something is amiss. The world in the photo has larger implications, perhaps like Adam and Eve discovering their nakedness. Wanting to know, or rather, a need to discover meaning is a fall from grace. Nakedness is shameful and nude is beautiful, right? The word “nude” implies an aesthetic, the body as an object that suffers not the same stigma as nakedness. But already I anticipate the distinctions blurring. Upon further inquiry and discussion it might turn out that my suppositions are naïve, or at the very least forced be to become more coherent. 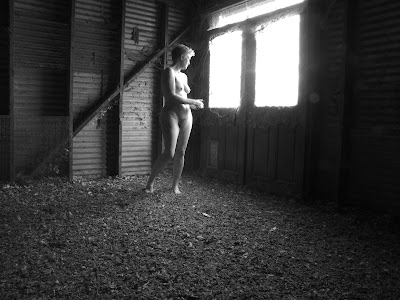 This is a nude. It is a “study.” The body is the focus, and is framed so. Never mind that the photo was taken in a duck coop with duck poop and feathers on the floor, and cobwebs on the walls and windows. 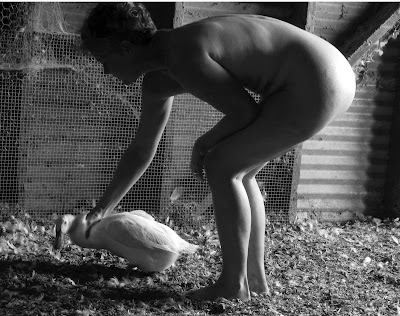 But what about this photo? The body is still considered; yet, does the introduction of the duck make her naked? As soon as we ask the question, “What is she doing with that duck?” or “She doesn’t have any clothes on and she’s holding a duck!” she becomes naked.
When we move from merely observing composition to querying for meaning, we move from nude to naked. But in no way do I mean to say that a photo has to be one or the other. 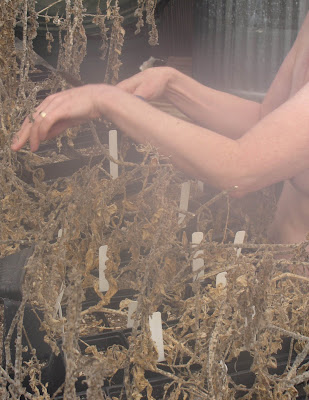 This photo was taken in our greenhouse. My lens steamed up, a happy mistake. Still, is this photo a “nude” or is it a picture of someone naked trimming dead plants? How about the following one? 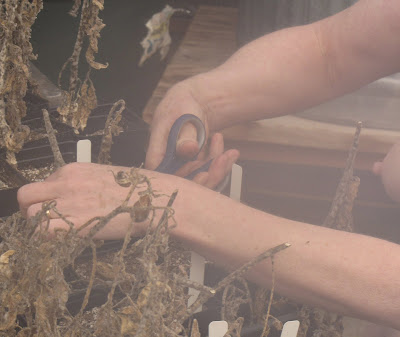 I am giving in to the temptation to withhold commentary for the moment in order for you, dear reader and gazer, to determine your own answer.
When preparing for this session I purposely set out to create vignettes that would begin to tell a little story. The photos above have a certain aura, a filter derived from location, composition and post-production. They are somewhat hermetic, which, now that I think about it some more, may be a good determination for what constitutes a “nude.”
Not so below: 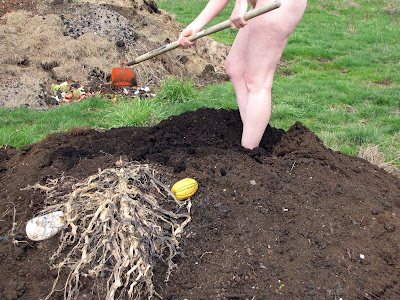 When I first called up this photo, I am certain I uttered aloud. It hit me in my solar plexus. When I showed it to DW, she commented that it seemed forced. Staged? Most certainly. After all, I do like those Vancouver guys, Jeff Wall and Rodney Graham. Yet, perhaps more to the point, I am most definitely trying to tell a story. Symbolism abounds. And the model becomes just another symbol from which one must attempt to derive meaning by itself and within the context of other symbols. She is not nude; we are forced to consider her as naked. 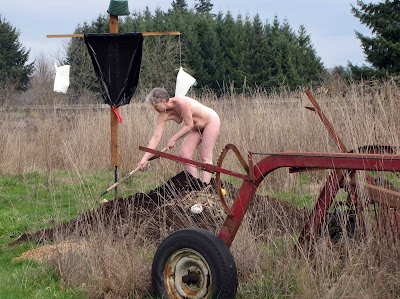 I also shot some video during this part of the session, for while I planned on submitting this work to fulfill part of the assignment, I also wanted to incorporate it into an ongoing project, “I Like Art but…” a semi-homage to Joseph Beuys. (The compost pile she is working contains a dead coyote and ten year’s subscriptions of both ArtForum and Art in America.)
Perhaps understandably, after this scene was fully documented, photos on the pond seemed perfunctory and that plan was scratched. That left the culvert pipe. Let me just say that photographing nudes in a rather public area makes it hard to concentrate on the task at hand, and with a level of discomfort that all were feeling (DW assisted), we made haste, and you know what that brings. With that said, I did manage to salvage one photo. 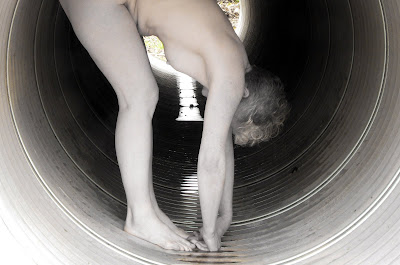 Even so, it does not have the same appeal as the above “nudes,” primarily because it is within a meaningless context. Even if we were able to experiment with lighting and a variety of poses, I suppose I would have walked away saying, “A nude in a pipe, so what?”
I will have to think some more on this nude vs naked conundrum. I hope that what thoughts I have put together so far make a modicum of sense and look forward to the notes and thoughts that come from next week’s in-class discussion.
In that the model is privy to this blog, I would like to publicly thank her for her time and willingness to endure the coop, the dirt and the chill. I think we managed to have some fun as well.
Posted by bastinptc at 3:21 PM

I don't. My fault. I am sure it is excellent work. I will revisit when in a different frame-of-mind. I can't even figure out the story line. Getting senile or was always just not up to it.

So, I showed this all to DW, who not only said she, understood your discussion of nude/naked, but also liked the nude/pipe photo. She told me to hurry up with getting into a better frame-of-mind, which I did, post haste!

Now, I will go through the post again, and I see you have a new one.

I may become the next Robert Hughes, yet.

If I pick one that I think I would have explored more is more interaction with the ducks.

Why?
Ducks are naked all day long and look absurd in a three piece suit.


Reminds me of a story of a man who worked for an insurance and requested in a transfer application for the company to pay for the travel expenses for his wife, children and pet duck.

The request was denied. He appealed the decision on the grounds that he had misspelled the word "dog." Request approved.

Aki - There are a couple more with the ducks. Tough to get good shots with them.

I will be looking at the photos again. I usually miss some worthy ones the first go-around.

i don't hvave a duck fetish

All I'm saying is something else


she looks stiff
cause she misses her clothes

I would too
aki

I still don't know how to interpret. Is the farm implement, with it's ratchet notches and lever supposed to represent dangerous maleness? Is the hoe handle? Or is it nothing to do with that? See? I am in kindergarten.

Get rid of the word "supposed" and just let it be what you think it is. If it just a hayrake or a hoe, so be it. If you see other associations, so be it.

OK, to bare my soul:
I see a nice looking woman with a phallic hoe-handle aiming at her crotch, and a farm implement lever and handle perfectly aligned/perpendicular with the hoe-handle, and a dangerous-looking ratchet piece sneaking up her backside. The lever and the ratchet piece look suspiciously like male genitalia.

Now, I am exposed as a pervert, whereas Aki only implied his oddity. I don't think these comments are what you were looking for, but nudity/nakedness are hard to ignore.

Now, the subject of burying her feet in coyote rot......ugh. The best I can offer there is cycle of life, or ashes to ashes, dust to dust.

I will be sorry about this in the morning!

Crash - Now you're really seeing the photo! Not what I was trying to say, but what you get from it. You pass.

Since I'm on a roll, the scarecrow has broad shoulders, like you do.