I was scanning some photos today and I think my scanner may be acting up. After multiple attempts and clicking on lord knows what, I finally got a correct image to kick out, even though the image quality is really bad. The picture is of scent oil that I dripped into an eddy on our favorite fishing hole. 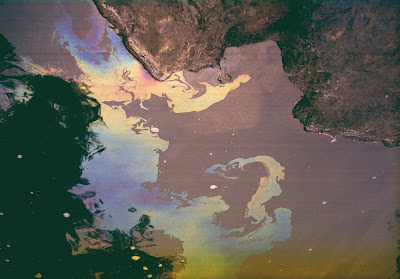 There are several things wrong with the photo. The film may be expired, have gotten too cold or warm, and so the color is way off and the film itself may have been discolored. Plus, I had the film processed at one of those one-hour places, so... But the scanner is definitely messed up too. There's lines in the shot that shouldn't be there, and the pixels are off too. So, why am I sharing this photo? So I can show you this one: 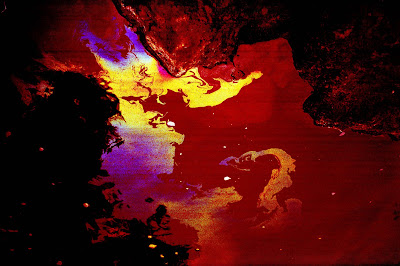 This is what the scanner kicked out before I set to trying to reset the thing. It's the same neg as above. Maybe the scanner knows that I now have a nifty digital camera and won't be needing it as much.

OK, so I just anthropomorphized my scanner. I was already halfway there anyway because of this second image. Why? because it suggested something more than the first image. I thought to myself that perhaps this would be how the fish smelled the scent oil, that perhaps if we were to cross the visual and olfactory wires, we'd get something like the second photo.

Maybe the fish are on some real good shit?

Film is what one has one one's teeth the next morning after indulging in some really good shit.

I cannot think of a better natural high than hooking into a beautiful ten-pound steelhead trout. That's the older me talking. Winter steelie season is almost underway. Expect coverage.