If one wants to know who owns what property in the area, the best bet is to ask someone whose family has a road named after them. A phone call was made on my behalf, I was vouched for, and I was in. As long as I didn't get the crotch of my jeans hung up on the barbed wire and the light held out. Otherwise, I was good to go and free to take my time. And, for the most part, I did take my time, and learned a few things about myself and my camera in the process. Some photos didn't turn out as I hoped they would, and I will have to return to try again. Nevertheless, prepare to be inundated. 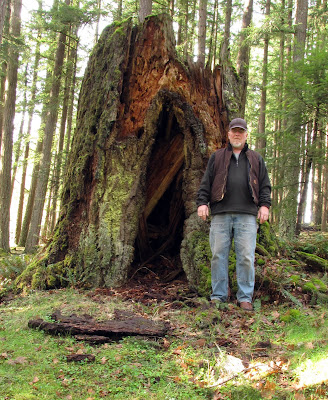 This is the stump that I earlier wrote was five feet tall. Memory and distance served me poorly. Last time I measured, I was 5' 10". I worked around the stump for some time, wanting to capture some of the textures and color contrasts between the wood and moss. My focus was off. Sometimes I miss analog and next time will bring my Canon A-1 along while I figure out the manual focus on my digital. 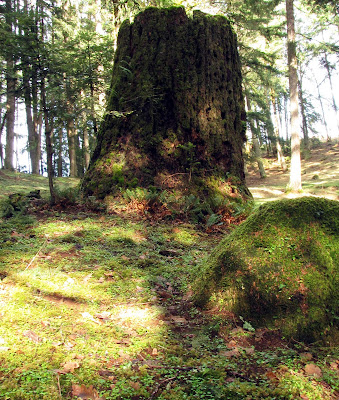 This is about as good as I was able to capture. I just now see the arrangement recalls male genitalia. 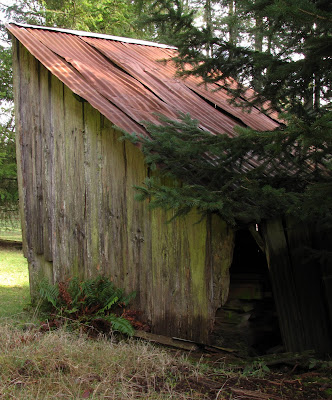 Next was the shed. I was struck by the roof and its soft color in the sunlight. However, I'm not so sure that comes across in the shot. I'll play around with PhotoShop and see what I can do. 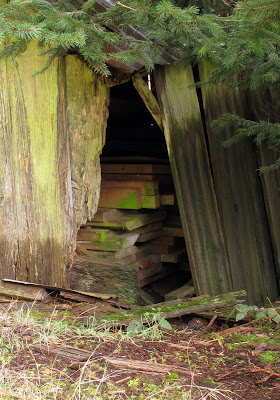 Part of the problem is the wide range of light in a given shot. In the photo above this one, the rotted corner is nearly lost. 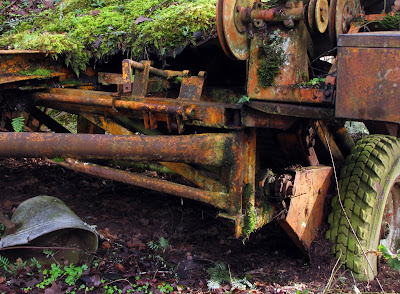 On to the rake. Again, an issue with the focus while this time concentrating on the framing for the shot. I have to think about the fact that the camera only goes to f8. Perhaps if I stepped back and used the zoom I'd have more luck with the depth of field. 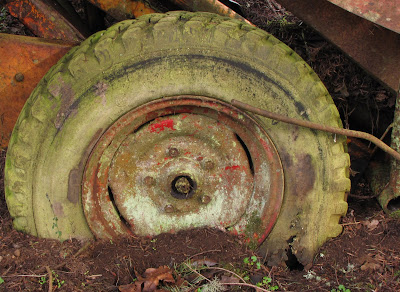 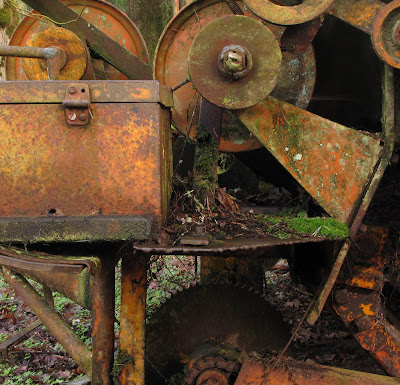 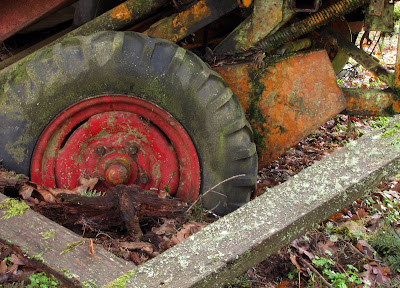 I spent some more time looking about, always trying to move in close, as if this would help me to see better. 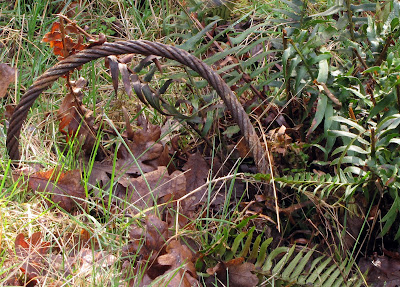 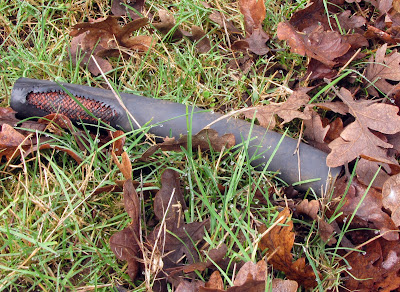 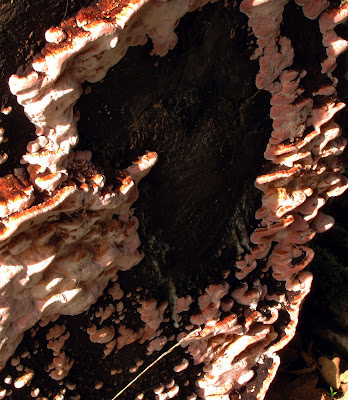 Just as I was preparing to line up some shots of the rake and the shed, I noticed another building behind some trees at the top of the hill. I was so intrigued that I lost my presence of mind and neglected to really work with what was in front of me. The images I did take show it. Another reason to return.

The building was an old saw mill. Nothing big, mind you. 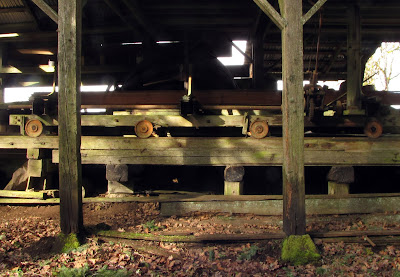 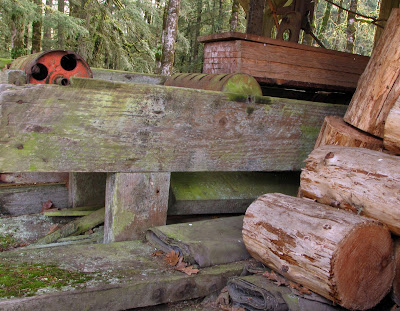 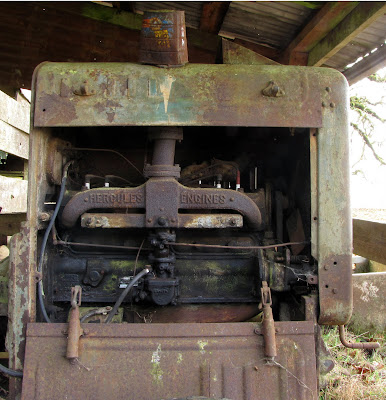 This shot of the engine, while perhaps of some historical interest, is otherwise purely gratuitous.

The mill was situated on the border of the wooded area and a field. The area was littered with other old farm equipment but I tread no further. I no longer had the cover of the woods and felt exposed. It is a personal flaw that I sometimes see myself photographing instead of just seeing what it is I wish to photograph. I returned downhill.

While I concentrated mostly on the man made in this session, I did attempt some other straight nature photography than the stump. There were some nice tree ferns on burls that I wish had come out better, yet again, focus issues.  Then I looked higher into the tree canopy. The contrast between the types of moss were striking. If I could only figure out a way to capture it... 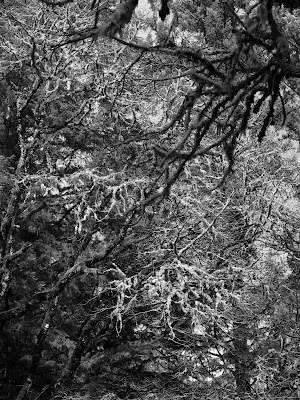 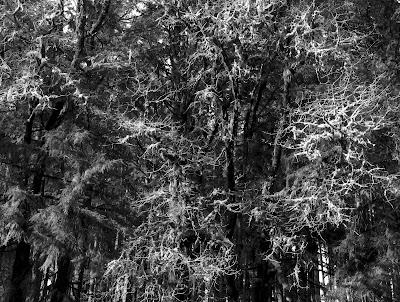 I come very close to chastising myself for not being a better photographer than I am, and then I stop short. While I don't consider the above any more than exercises in developing better skills, I do enjoy the learning process and the occasional sign that I am making progress. Yep, I'm giving myself permission.
Posted by bastinptc at 6:16 PM

Well, I certainly enjoyed each one. How long did it take you to do that series?

Things look so green. Is that just "Oregon" or did you pump it up?

In the old mill you showed a stack of lumber.

Attempting to count, figuring 2x4's, and estimating that top cover board being whole, on the rough cuts. That board was twenty two inches wide, four and half inches thick (who knows how long).

What type of wood? How old (estimate), How long, and would they give/sell you the footage (assuming it is usable). There is a market for well cured stuff.

Meant to mention, lumbering, you take old growth trees measuring four feet up the trunk or higher. Thats the girth point you use to figure timber content in the trunk and you cut at that point. The mills do not like the lateral support buldges. Hence, your high stumps in the woods of old growth cuttings.

Good picts. Get a lens filter - yellow or polarized.

C - Thanks. I was out for about two hours. The skies cleared up again tonight after a rain. If clear again tomorrow, I will return. very little pumping involved in the photos, and certainly no need for more green.

TM - When I return, I will take a closer look at the rough hewn and try to determine the type. I'm guessing Doug Fir as that is the predominant lumber tree in the area.

As for marketability, I would imagine that it is stored for a need, but so was the lumber in the shed, and may be elements of a bygone era. No blades or belts were in sight. Still, such wood is readily available in our area. I have about 1,000 board feet of 2x8x10 and 1x8x10 on stickers in my barn. It's been there for five years as I am unable to find a buyer.

That was the only stump of that size I could see.

I have inquired with canon about lens filters for my camera model. There are none available. But I may have an idea. In the meantime, I will work with PhotoShop a bit more.

TM - While it is not a flattering aspect of my character, after your suggestion about filters, I looked to see what PS had to offer. What do you know? Instant improvements with the slightest experimentation! While I won't be reposting the pictures, let us hope that future examples show improvement.

"I come very close to chastising myself for not being a better photographer than I am, and then I stop short. While I don't consider the above any more than exercises in developing better skills, I do enjoy the learning process and the occasional sign that I am making progress. Yep, I'm giving myself permission. "

A wonderful paragraph. Replace the single word "photographer" with "poker player" (or any avocation, really), and you find words to live by.

I especially like the one you titled "other tire1" but I can't say exactly why, and the stump, too, of course.

The images of the abandoned equipment are really good.

As per joxum, it is good. Don't argue with me. If these aren't enjoyable to a viewer, what in the world does it take? If you are playing to a different viewer, a professor of art, etc, ok, but it would mean less.

Crash - It is merely standards I set for myself, and those are sometimes restructured based on the input of others and what I see of others' work. I have a different perspective about art making than others, and that also informs my self-judgment.

OK, OK, but they are good photos, in an absolute sense.

I can just speak for myself, as a viewer of your work, but this series is one of your most enjoyable, to me. Whether that is satisfying to you or not, I can't answer.

C - I put them out there in the hope they will be enjoyed. I write about my process in an attempt to understand better and be better understood, and encourage feedback.

OK, my friend, I understand. If you save your $ and get a camera, non-zoom, like NT has, you will be better able to achieve what you want. F-stops, depth-of-field, etc. I know you must watch her site.
Panasonic GF1, pancake lens.