The lights have been flickering, and that likely means some wind’s comin’. Yes, we now have wind. Most of the time we lose power a short time before we get a blast, especially when the winds are from the west. This means that there is a good chance that when a really mighty wind comes a-howlin’, we will already be in the dark, unless, of course, it’s during the day.
Our big firs are over 90 feet tall and less than that distance to our west. It could be bad, confusingly bad.
I think about these things. Yet, aside from having a tassel of flashlights and the generator gassed up, ready to go, I have very little else in the way of a ‘plan’ in the case of a direct hit. So, it might be more accurate to say that instead of a strategy, I have a worry.
Readily recognizable harbingers will do that. Otherwise, most other concerns get relegated to Worry’s closest relative, Hope.
There’s a poem in the somewhere. And that poem is kin to songs about losing jobs, payin’ bills, getting’ divorced and hard drinkin’.
I can’t recall a poem or song about getting one’s teeth cleaned. Let’s just say the discomfort this morning was commensurate with the time since the last. There was, however, a story come from it, although not my own, about three hens and two vying roosters. How to explain the circumstances of the telling, for there was no transition, no ‘that reminds me of’, no lead-in except ‘hello’. More like a staged presentation, a storyteller trying out new material on the mouth-a-gape captive.
There are songs about the goings-on in a chicken coop.

We’re still having to heat the house at night, and if I had to guess, I’d say we have about a half-cord left to last well past Mother’s Day (lots of poems, songs and such). I fetched tonight’s load between thunder clouds. What did I know, down here in the dungeon? Might as well have been some big truck rollin’ through (more songs) except DW give me the heads up. Now we’re getting some hail, and after that we’ll just be waitin’ on a pretty sunset. ‘Cause you know there’ll be one.

What'd I tell ya? 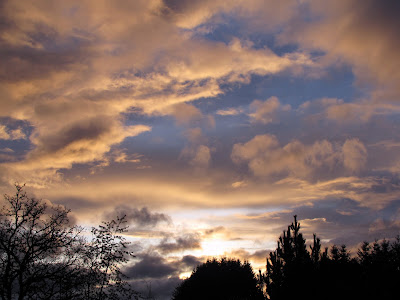 Posted by bastinptc at 5:46 PM

Nice blogging, lately. You paint great pictures without the paint.