When I woke up from a dream about trying to find a way to turn dog shit into a bowtie, I knew the day was getting off to a bad start. Just no way a body can kick that symbolism back down into the hole of the subconscious. The only hope is for distraction. So, after my fill of coffee, I grabbed my camera and took a drive.

I had a destination in mind but evidently had not seen the No Trespassing signs months back when coming through the area at 60 mph. I did, however, take the road alongside up into the hills and into Weyerhauser country.
A half mile off of the main road the pavement I was on turned to gravel. The gravel itself was fairly new or the road well maintained, for there was no washboard effect to be felt for the two more miles up into the hills. There were a number of side logging roads that were gated, and only one area of clear-cut right along the road I was on. Eventually, my progress was blocked by a gate. Nevertheless, with perhaps only another one hundred feet in elevation from where I stopped,  I had a pretty spectacular view of the canyon below.
I did not do justice to the view with this photo, yet perhaps you can get a feel for the vista. 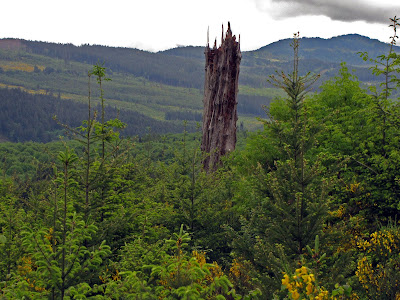 (The yellow in the foreground is pernicious Scotch Broom, the same as in the distance upper left.)
On my way back down I stopped at the clear-cut area. It had been worked several years previously, but with evidence of a few stray trees recently cut. I could have taken more photos of the mess, but I really had in mind a photo of the border of scotch broom that had seeded itself around the edge of the barren area. Yet, as soon as I turned off the truck, I heard something unexpected: running water.
The sound was coming from just a little ways back up the road. I left the truck and tried to narrow down where the water was, for I could see no sign of it from the road. It seemed to be coming down through some heavy vegetation, again, somewhat unexpected, and even though I could hear it, I still could not see any of it. I moved a bit farther up the road to see if I might gain a better perspective, and heard yet more rushing water a bit higher on the hill.
This time I could see it, yet I’m afraid my camera work failed me again. 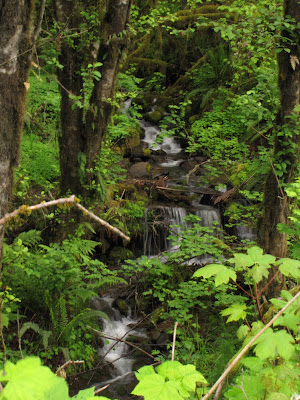 Resolved to come back with a tripod and more suitable boots, I returned to the truck. Yet something bothered me. With so much water coming down the hill from various locations, where were the culverts under the road? I returned to the uphill stream and found its continuance, but the lower one eluded me for a bit. I had to follow the water down a roadside ditch until I found the pipe. On the other side of the road the pipe was positioned tight against a big pile of wood debris that had no doubt been placed there to limit the erosion through the clear cut area.  One hundred feet away is a beautiful little waterfall. Nothing pretty about this downhill slope.
And even Mr. Boulder doesn’t like it. 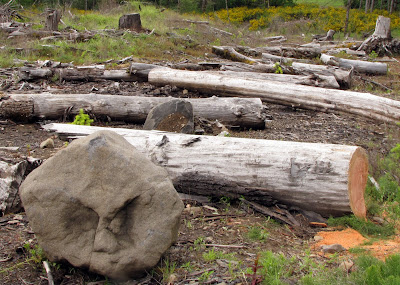 I took the slope back down in second gear so as to save my brakes. As I hit the main road I noticed a sign that pointed up the hill I was just on. The sign indicated that the road was an evacuation route. Up a logging road? To where? I already knew what for. Thirty miles further up the canyon stands a dam that holds back a huge reservoir ten miles long and one hundred feet deep. A sizable earthquake or volcanic glacial melt could send that lake down upon the canyon floor on which I was now driving. The next such paved escape route back up into the hills is the road that takes me home.
Posted by bastinptc at 12:05 AM

That was good. The sawdust in the boulder photo looked fresh.

Awesome catch of Mr. Boulder! Thanks for the photos and the tale of your adventure.