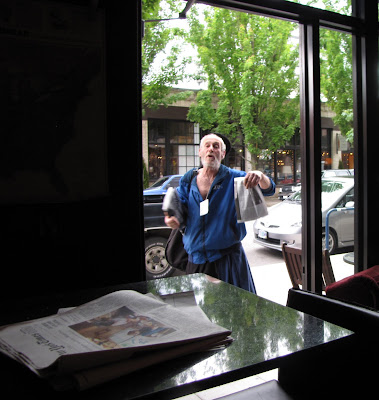 He was mad. Even angry. He was pissed because he presumed I was unreceptive. Not would be. Was. But he told me anyway.
Having forgotten the newspaper was for peddling, not wielding, he wasn’t going to leave until the situation escalated. So I obliged him with proof there was no such thing as ‘because’.
Posted by bastinptc at 10:09 PM

Was the communication through glass or an open doorway?

Wide open door. I was not very Christian in my actions and will no doubt regret it come 05/10/12.

Ain't OR grand. A beautiful place. Portland the city of roses, artists everywhere creating stuff to please the eye and stimulate the mind.

Roses, I'm told, do best when they have thorns and - well, bone meal.

But why'd you swipe his newspaper?

I'd rather not leave two comments a day, you understand. It gives the writer/receiver of such pretentions.

But I just had to use the word verification next:

Maintaining the secret behind the misery/comeuppance/revelation of the date is his power. Only he has been given the knowledge, thus assuring his place in a pantheon. Rarely does one encounter someone so forward with their delusion, and those who sell the local homeless newspaper generally have it somewhat together, instructed not to be intrusive. He may have been having an episode sparked by some previous encounter, or he was looking for a bed for the night. Taking his picture did nothing but send him on his way.

How do I know about such things? Among other duties, I use to be a "keeper of the smokes" on an acute psychiatric ward.

TM - The option of brevity precluded that I could not draw out the contrast between the day old NYT I was reading and the the leg-up of which he had an armful.

I guess he had a bad day. Happens to the best of us :)

when i was told about 5-10-2010 by an extremely competent woman I remarked, "Fabulous, something to look forward to."

She laughed, it's so nice to see someone attractive laugh.

The date: The end of the world according to the Mayan calendar.