The very little we know is dwarfed only by what we fail to recognize.

I haven't been in the mood, which is to say that I'm in a bit of one. And the free jazz on the radio is not helping. It often does, but it may be that for this particular situation, the stymied imagination of a funk, it's not as helpful. Old time country? I suppose I could hunt some down to provide background for this rural sinkhole of the spirit.

But I hyperbolize. A loud subterfuge or compensation, I haven't quite figured. It could be as quiet as the tree frog in the window well last night, jumping against the glass toward the light in the dungeon. Or the bipolar woman across the street, aging quickly, or so I saw yesterday, her down on one knee, palms flat in the gravel alongside the road, and another woman there to assist by standing close. I could have pulled into our drive, parked the rig and gone to see what was what, besides the relation to and marriage to recidivists and the company they keep. I could have. But like going out in the night with a flashlight and crawling down in that concrete hole to liberate the frog, I didn't. Just not in me, so I confess.

DW is still very sad. And mad. It could have been handled better, though the outcome was likely not to change. I have since seen her smile, heard her laugh; so yes, maybe change, even with so much yet to resolve. The word 'infectious' has been used. I stick close, the word 'guard' in all of its manifestations.

So it may not be surprising that upon seeing the fresh and shortish run of gopher mounds in the yard, I fetched the hose and .22, opened the spigot full blast, and waited. No doubt there.

This falls under the category of tangential: I caught up with the weed-whacking yesterday, enough so that I can now paint everything blue, wait for brown and then till for a deeper hue. (Edging and mulch to follow.) Then, as a gift to myself, sought that warbler. The tall grass pondside was a cool cushion for my tush, and I found simple pleasure in waiting. The American Goldfinch came blurred with the auto focus a tad too set on the rocks on which which it stood. I switched to manual with some success. 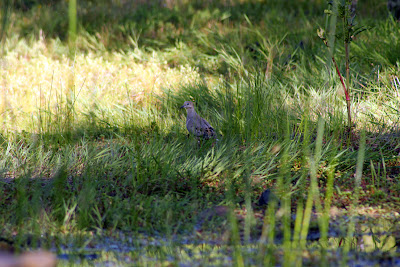 After an hour or so, my leg started to fall asleep, so I decided to leave. As I stood up, a Mallard hen came out of hiding and took wing.
Posted by bastinptc at 12:20 PM

Nice job on he photo.