Home on the Range

Five handed, blinds were 100/200. The Cut-Off min-raised, and I should have popped it up, what with being the Button and having KQh, but I didn't. I figured I should see the flop and then act in what became a family pot. My bad. With 1K in the middle, I turned over Qd9d8h, and it checked to me, so I jammed with my remaining 2300 and had everyone covered. The SB and UTG called. SB turned over T4c, and UTG said, "I have top pair," and showed JcQd. Drum roll please. Blank; Jack.

I'll spare you the SB's rationale. With only 200 left in my stack, I blinded out and declined a rebuy.

DW: But did you have a good time?

I did. I told jokes, bought drinks, tipped big. yet, when the UTG said, "You should rebuy. I said you were rich, and that means you'll win tonight" I still declined.

There was a term, before poker's 'donk' and such... 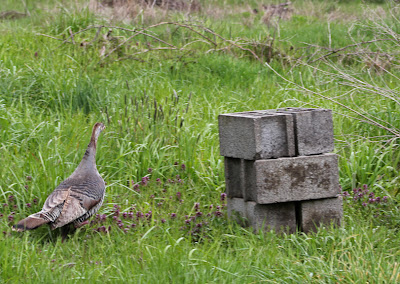 I suppose I could have read into her presence on the farm the last few days. But then I would have taken the rebuy.
Posted by bastinptc at 10:53 PM

A concept we all lose track of and continually struggle with:

DW: But did you have a good time?

A simple question without a simple answer, especially when poker is involved.