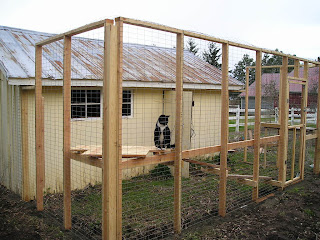 My dear wife is putting the birds out today. She just called me on the radio to tell me that our cat, Mittens, just crawled into a culvert pipe. She needed me to come out and help retrieve him. Mittens is — or was — well, he still is our outdoor cat, sort of. In the past, that culvert was part of his daily prowl.

The previous owners of this place had 3 cats, which were all indoor/outdoor cats via a cat door in the basement door. They took with them when they moved down the road about three miles. Mittens was one of those cats. He evidently didn’t like the new digs, for by the time we moved in, Mittens was back. We called his owners, they came to get him, and three days later he was back here. It seemed pointless that they come back to get him, so here he stayed. He sealed the deal when he brought me a mouse. A farm needs a good mouser.

Yet, our farm is small, and to my way of thinking, we only needed one cat to patrol the grounds. And Mitts had competition. Feral cats abound.

The first day we moved in I had the shit scared out of me when I walked into one of the barns and a gray streak took off up a ladder into a loft. I climbed up the ladder to see a long-haired Mane Coon-looking cat back in a corner. And over the next couple days I saw a few other cats wandering around out in the fields.

Before I go any further with this story, I want to say that I have nothing against cats. I’ve had them as pets: Freud, an orange tabby I found when I was a senior in High School; and Louie, a tuxedo (Mitts is also a tuxedo) that I got custody of after a divorce. They were good companions. However, feral cats are a nuisance. While they may keep down the vole and mouse population, they also wreak havoc on birds, and that’s where they cross the line. Oh, and they also carry a shit load of diseases. Let me just say this: If I get the opportunity, feral cats get composted.

Yet, when we first moved here, I didn’t have the tools necessary for a permanent solution. I had a pellet gun, a deterrent. And the next time I saw the gray cat, I let him have it as he was running away.

Weeks went by without a sighting. In the meantime, we changed the basement door and got rid of the cat door. Mittens stayed out all day and in the evening we would put him in the laundry room for the night. One day I caught sight of a gray flash from the corner of my eye headed toward the blackberries behind a barn and went to investigate. Huddled under the brambles was what was left of the Mane Coon. He was emaciated and had a long, gaping wound on his back. He didn’t bother to run away when I approached. He was obviously near death.

I went up to the house to get the pellet gun. A properly placed pellet would put him out of his misery. I told my dear wife about what I ad seen, and she insisted that she go have a look for herself. By the time I got back outside, she had the cat in her lap.

I married a very empathic city girl. Four years later, that cat is still in her lap. His name is Granero (Spanish for barn). He stays in the house full time, has a pellet under the skin on his right hindquarter, and he came to us already fixed. A dump job. He’s a good cat, yet he stays pretty clear of me, and I don’t blame him.

All of this to get back around to Mittens.

Mittens has had a run-in with a gun as well. His previous owner told us a story of him laying in one of the outbuilding for weeks recovering from what apparently was a .22 caliber bullet to his butt. He must have strayed onto someone else’s property and crawled back home. Because of this wound, his tail is dead and just hangs behind him. X rays show the bullet still lodged in his innards.

About eight months ago, Mittens had another brush with death when he became lethargic, feverish and quit shitting. We took him to the Vet right away, but it looked like he was a goner. His colon had shut down. Yet, after a week of intravenous feeding, antibiotics, steroids and what have you, he started to turn around. My dear wife was convinced that somehow, something outside had caused his illness, thus ending his days as an outside cat. Dear Mitts was not thrilled in the least. You see, even though he was fixed at some point, he still sprayed. The barns, farm equipment and vehicles (and his limp tail) all have his mark on them. And when given the opportunity to stroll around upstairs, he would attempt to claim that area as his as well, which simply wouldn’t do. The basement was the only place where he kept this tendency in check, so the outdoor kitty became the basement kitty. And he howled in protest.

Since the basement is also my studio, I had to endure his misery and try to ignore it while working or playing poker. It did not go well until a compromise was reached. Mittens could go back outside only if I built an enclosure for him. I gladly took on the task.

We have a small shed behind the garage that we use only to store our generator. It is about 8 feet by 14 feet. I built a pen with the same dimensions on the front of this shed and this is where Mitts spends his daylight hours. He still howls from a perch in his cage, but at least I can write this undisturbed/perturbed. When he comes in at night, he sleeps on a chair next to my desk, allowing me the quiet I require while playing poker.

Well, SandMan wishes you luck, but also offers a bit of warning...

I just heard Bodog got shut down and all its assets seized by Uncle Sam. I'm afraid, paranoid perhaps, that FTP and PS are next on the list.

There was some noise about Bodog on another blog I read. Evidently, the report was erroneous. But, we'll see. I'll look further.

Good luck, bro! Do I find you as bastinptc?

I hope u got the deposit bonus!