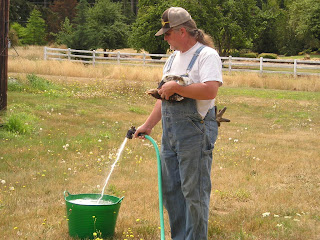 This is the Chocolate Indian Runner that hurt her left leg. She’s been in the infirmary the whole time she’s been injured. It’s been a couple weeks now and she’s still not standing on the leg. In fact, the leg is somewhat splayed out to the side and appears in danger of being frozen in that position, thereby rendering it useless. We’d prefer that this not happen, for we’d have to then put her down.

For the first week, I would go in, catch her and give her physical therapy, some passive range of motion and then check for muscle tone by pushing against her foot. The leg is still strong, but the splay was bothering me so earlier this week I upped the PT to morning and night. After the PT I set her on the ground and place the leg underneath her. When I let go she tries to stand up, which is encouraging, but soon thereafter the leg is jutting out again. Today I took her outside for a little sunshine and a “swim.” I’d like her to start using the leg a little more and maybe the water will encourage her. The water will also clean her off a bit. Ducks like to dunk their heads under water to keep their heads and beaks clean. She hasn’t been doing this, so she got a bath as well. Despite not liking being held, I believe she might have like the water and a clean head. 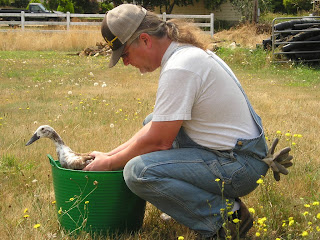 We have four chocolate Runners. They are our oldest ducks, so they don’t lay too many eggs anymore. If we had a larger flock, meaning that we had more of an egg business, the old ladies might have been culled by now. They still eat as much as the producers, and feed prices have gone up considerably in the last few years. The injured duck’s appetite is still good. Besides the duck feed that she eats, we are feeding her a dozen night crawlers a day to keep her strength up. We put them in her water bowl to encourage her to drink a bit more, and maybe clean her head. But we have now added another $2.00 to our costs each day.

The price for a dozen organic duck eggs has had to go up to compensate for this increase. Great, huh? No. We break even. And we’re not alone.

Farmers are selling off their livestock. They can’t afford to feed them. Corn is being grown in massive quantities now, yet it goes to ethanol production. Don’t get me started…
Posted by bastinptc at 4:20 PM

Hey look at that; a duck, a man, and a shark all in the same picture!

I posted the previous comment before text accompanied the pictures... That you felt fit for your blog posting of the day to focus around your feathered friend tells me the subject is important to you. On that front, I am sorry its condition is not particularly improving.

What disturbs me more is your overall lack of hope for your industry and, by extension, the status of my friend and his dear wife. I do hope they will be well, regardless of what the future may bring.