Before moving to Oregon, DW and I lived in Chicago for 18 years. And, by Chicago, I don’t mean a suburb that I opt not to name because few people would know of it, while everyone has heard of Chicago. No, we lived in the city proper, and for much of that time, in neighborhoods that carry the Chitown stigma that one encounters in some foreign countries: “Chicago? Ah! Chicago boom-boom!”

The adjustment to a quiet, rural existence was an easy one for us, partly because both of us had experienced some aspect of this life at some other time, DW in Colorado as a teen, and for me, a rich childhood on my grandparents farm in south-central Illinois. Yet, after so many years in a tough urban existence, there remains a certain edge that both of us can call to the fore at the drop of a hat. DW can deliver well-chosen words to a rude individual that will set that person on their heels, and I can muster a demeanor that lets a ruffian know that I am not the person they want to fuck with. Still, most of the time we remain congenial and affable, as those are the type of people we generally encounter out here in the sticks, and for the most part, everywhere else as well.

We weren’t anticipating any trouble being back in an urban environment last week in Southern California. And we didn’t get any. Yet, the transition from here to there always puts a little edge on, just in case. Senses get heightened, mostly by the contrasts.

SoCal is brown; this part of Oregon is very green. Traffic on the 101 and 405 is a bit daunting; here, we occasionally have to slow down and drive behind tractors or combines for a couple miles. As spread out as everything is in the LA area, people are still stacked up on each other; here, talking to a neighbor over a fence first requires a walk of 100 yards. I belabor the obvious… Our hillsides burn and slide just as readily. They have earthquakes, as do we; yet our geological plate movements have the added bonus of volcanoes.

So, what’s the point I am trying to make?

DW’s grandmother lives in Beverly Hills. Our last full day away we went to visit her, and when we were saying our goodbyes, we asked for directions to Mulholland Drive. We were under the impression that we could take it almost all the way back to Calabasas. Not so, but being big David Lynch fans, we wanted to experience the road for ourselves.

We first had to drive through a park on Franklin Canyon Drive. Who would have thought there would be such a “green” place? It was a pleasant surprise, and for the Dear Wife, rather harrowing. The road ran across a ridge a great deal of its length and was very narrow. If she had been driving, perhaps she would not have worried as much, for I found the road quite navigable…just like any other single lane road cut into a mountainside that I drive to go fishing.

As we hit Mulholland, we popped the soundtrack of “Lost Highway” into the CD player. We zigged and zagged for miles until Mulholland was no more and dumped into Encino Hill Drive. After heating up the brakes on a 13% grade for a mile or so, we hit Havenhurst, which, we were told, would bring us back to the 101 and back to DW’s family off of Valley Circle.

Except that we couldn’t get on the 101 going west at Havenhurst, so I kept driving up to Burbank, hung a left, hung another left on Balboa, and voila! I merge like a native, like I have done this 1,000 times before, because I have, in Chicago, and I exclaim something that startles both of us: “I could live here!” 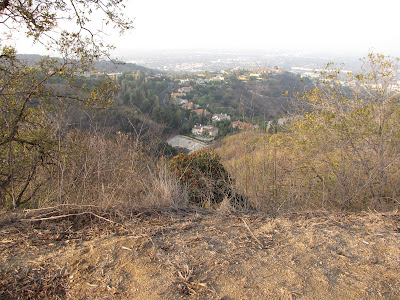 The view from Mulholland into the valley. Not the best shot, but the winding, narrow road offered few places to pull over. 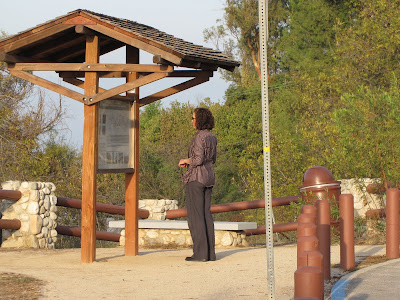 The DW isn't going to like this, but here's a picture of her reading about the history of Mulholland Drive, named after an early water and power utilities mogul.
Posted by bastinptc at 4:30 PM

Nice shot of DW. Just enough that one gets a sense of her, yet if I saw her in person, I wouldn't recognize her, so her anonymnity is preserved.