Time for another installment of Pub Tourney Mayhem!

Aw, it’s not that bad. I had Mom on my right again, so my right thigh got a lot of action. And May was on my left. Long time readers will remember that May’s full name is May Very-Likely-Call-Any-Raise. She took down a short stacked all-in with 72 off tonight. Late in the blinds, right before the add-on, I had A8off in the SB. May and I were the only two players. The flop came 776, check, check. Turn was an A and I put her all in. She has 79.
Now, before you say “should have raised preflop, bastin,” I have to refer you back to her name. She would have called. She loves to call. And she gets lucky a lot.

May is not well liked because of this tendency to call. I may be an exception. She’s OK, and I know she likes me. Both she and Mom were picking my brain all night, asking me poker questions, both showing me their hands, wanting me to comment on whether or not they should have called instead of folding, call or raise. I had plenty of time to oblige as I was pretty much card dead all night. I can remember all of the hands I played, all seven of them.

The clincher was when I was in the BB with only a small blind’s worth of chips behind. I had AA and threw in my last chip against KJ. 9 through K took it down and I called the Dear Wife to say I was headed home.

Speaking of DW, she bought me a t-shirt online and it arrived today. I wore it tonight.

It was well-received, as I found out a couple weeks ago, and much to my surprise, the majority of these freerollers voted for Obama. (I know I’m setting myself up here.) I may wear it again Friday night at the home game, even though I know it will not be appreciated there. Anything to get a psychological advantage at the table. 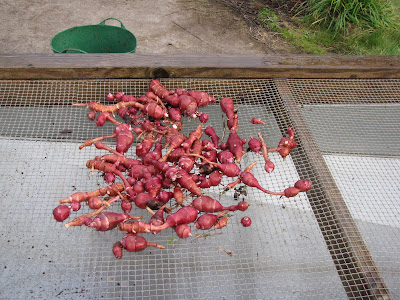 I also dug up the first bunch of Jerusalem Artichokes. I got this haul from a mere 18 square inches of ground. The whole patch is about 12 square feet. This variety is red, as opposed to the usual white, and we think they are more flavorful. I took the picture right after washing them on my handmade washing table (the construction of which I am mighty proud).

I had promised Barbie at the pub tourney that I would give her some, so I took about 4 pounds of them to her, and waited to do so until she was engaged in a conversation. Read between the lines.

(I figured out how to link in my blog tonight. Hurray for me!)
Posted by bastinptc at 11:15 PM

The tee shirt made me laugh!

Thx for showing the Jerusalems.

Wow, i want one of those shirts!

"Wow, i want one of those shirts!"