Virtually sedentary (but not dead yet): toward an explication

I’ve been home, what, five days? I’m almost settled back into a routine, nearly caught up with all that I do in a day that went neglected while in Vegas: emails, blogroll, twit links, facebook soundbites, Craig’s List and State of Oregon job listings, and a review of hits on my website and this here blog. I started a flickr account and prepared for a book discussion tomorrow. I picked up mail, hauled firewood, walked the dog and kissed DW a zillion times.

Something feels unfinished. Let’s see where this notion takes us.
Before I left for Vegas, a friend, another artist who is a lot more involved with social media than I (he refers to it as “trafficking”) gave me the heads-up on a regional foundation art fellowship grant that I should apply for. It’s a big chunk of change that could make life a little easier in the near term, so I’ve been working on it since I came home.
By and large, I like what I’ve written. The artist’s statement portion of the application is almost rote at this point, having used basically the same text for nearly every teaching job app and grant request in the last year. I’m presenting the “Field Burning” series as a body of work and I’ve had a lot of time to think about what it is that I want to convey in the work.
Farming in our area is going through a major transformation, specifically for grass seed farmers. Recent legislation severely limits the amount of field burning that farmers can do after 2009. The farmers maintain that field burning is the most efficient way to insure a healthy crop; others see the burning as a significant source of pollution and a health risk. While I see both points of view, I see another effect: the burned landscape is actually quite spectacular. “Field Burnings” is part photo-documentary, part reference to painters like Clyfford Still, Anselm Kiefer, and Richard Diebenkorn, and records the end of an era for some farmers while highlighting the beauty that can be found in a controversial farming practice.
I have to tread lightly and strategically in how I describe the body of work. The foundation that is offering the grant comes from old lumber money, so there is the possibility of a particular politic that I may have to dance around; yet there is something else that may present a higher hurdle. The application information obliquely indicates that there will be a preference given to painting and crafts. Those pursuits, it seems, were the favorites of the foundation’s founder. Abstract painting is within her esthetic taste, so I may stand a chance.
While in Vegas, I spent a fair amount of the first couple days visiting with an old friend from Chicago. Mike used to be a big wig in the City of Chicago art program. He is also a fairly successful artist and has taken his show, as it were, to NYC, where, within a short period of time, he has established a presence. We hadn’t seen each other in eight years or so, yet, as is often the case with old friends, we picked up right where we left off and had a great time.
We were on our way over to the Imperial Palace’s notorious Geisha Bar to look at hookers when Mike remarked that he really liked the “Field Burning” series. “They’re beautiful, “ he said, “and remind me of Kiefer, but what are they beyond that?” Now, to some that might seem to be an odd statement, but I knew what he meant. We both come from a conceptual art background, one where my recent text-based photos have more resonance than my landscapes.
“It’s a regional thing,” I responded, and proceeded to outline the recent legislative battle. He understood. I then began to explain the struggle that I have with the landscape as subject matter, the seduction it has, a siren song, for it entrances one to be content with mere re-presentation.
“What’s wrong with that?” one might ask. Nothing. Absolutely nothing, except it’s not all what I see, or more specifically, think about when I look at the terrain before me.
Now, after farming for over six years, I have a new understanding of what is meant by “landscape,” namely that the geography has been shaped, and is as much about human impact on the land as it is about the contour and flora.
It is what makes me takes photos like this: 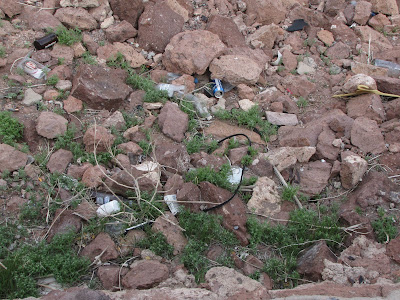 Hoover (Damn) Trash
Yet such a photo does nothing except make the blatant statement, “Litter bad!” and therefore has no esthetic value. It is extreme, closed, and has no elegance to it. There is no art.
The key word is ‘closed’. Likewise, a photo like the next one is closed: “Waterfall pretty!” 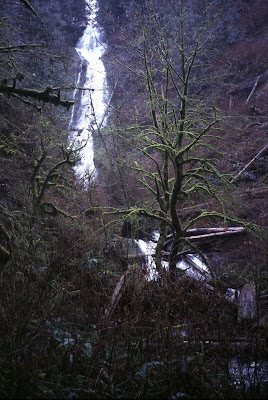 I went to the photos from the local exhibit. I intentionally didn't look at the names, just looked through the photos to see if I could pick out yours. I could not (until I looked for your name). Both are very nice to my untrained eye, and it must be disappointing to have them well-recieved, then not sell. I'm sorry. Obviously the way the economy has a lot to do with that.

and kissed DW a zillion times.
Only a zillion? Come on, you can do better than that.

It's strange, how the mind sometimes forgets how much work the body has to do during a regular daily schedule.

PS: I admit to skipping a few paragraphs, but that's mostly to do with tired eyes.

It's frustrating to see the box you are in and not be able to come up with a way to help you out. All I can offer is a generality: When in a situation like this, it is important to keep doing things, any things, that keep you moving forward. Eventually, you will emerge from the box, but maybe not where you thought you would.

But dammit -- what about the hookers?

DW is now reviewing app materials and says I'm too guarded. The irony.

36 - I couldn't distinguish the hookers from a bachelorette party if my life depended on it.

We are in a no holds barred charm contest, where the person who dies with the most friends wins.

I must have shared with you a book on the economics of the art world. It is like the church of scientology, you get the outer church for the masses and the inner church for the keepers of the flame.

as always, i don't stand by any of my statements. they are just mumblings in a jam packed subway.

Aki - I am very familiar with the inner circle, etc. Since it has very little to do with art, and is more about how that particular consensus is built, it would serve no purpose to go into it here.

I am clueless when it comes to the art world, but please know that I wish you all the best and am here to provide any support that I can.