Back to the woods

It being another partly sunny day, DW and I headed off to the woods to take some pictures. I also wanted DW to see this beautiful little holler.

Upon our arrival, we heard and then saw a four-wheeler and its driver moving about on the hill, removing little pink strips of plastic from trees. We waved and he came over to us. Although cleared with the widow, we wanted to make sure we wouldn't be interrupting his business. We chatted a while, and eventually the conversation got around to the big stump. There are no hand holds or springboard cuts visible because the tree came down with the help of a strong wind some fifteen years ago. He told us of his plan to put a tin roof over the remainder as both he and his mother as children had played under the old growth's canopy.

Saying our good-byes, DW and I set to work, evidence of such you will see tomorrow; but in the meantime, I intend to show you something else. 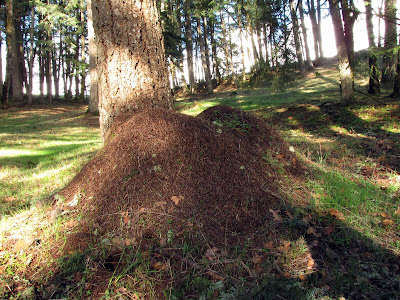 This is an ant mound. The home of the thatch, or mound ant. There are several in this woods, and according to our friend Lucinda, these ants have resided here as long as she remembers. They collect fir leaves and twigs to build their mounds. I must admit, on my first visit to these woods I asked myself why someone would go to the bother to rake up piles of leaves and twigs.

Up close and personal:

Posted by bastinptc at 6:49 PM

Most enjoyable, from start to finish. You seldom mention DW. Glad you included her. Or she let you include her. Removal of pink strips.....being naughty?

Thank you for remembering. Looking foreward to the next installment of the vale.

Was your rider timber cruising or line surveying?

C - I needed a stand-in for some shots, so DW. She also helped negotiate the conversation with the fellow (the widow's grandson)on the quad.

TM - Word has it fourth hand that the widow is moving to town and trees are headed to the mill. I just out and out asked the guy if he was getting set to cull. He said, "Just countin'." Then a bit later he mentioned that the watershed folks prevented cutting within fifty feet of the little creek (which I haven't shot yet), so my poker ears tell me "yes."

Yes. The Green Belt. Last time I checked we were allowed twenty feet.

I'd not thought about Or. having such.