DW was awake before me this morning. Nothing unusual there. Rather, I was awake but she suggested I go back to sleep as she handled the morning feedings, dog walk and such. But then she called upstairs. There were two bucks in the back yard.

It is not unusual to see deer in our yard. We provide a lot of greenery and cover, and the pond offers a drink and cool-down. Yet, bucks are rare, seeming to have a healthier sense of security that the does, and therefore, I'm guessing, remain in the woods. Poachers know no season, and the boys seem to understand this. Therefore, I was not surprised to see very small racks, barely much more than felty stubs on the two young boys.

More surprising was the little bird that lighted on our driveway last evening. It was a warbler, of that much I was certain. A blue, black and white warbler, which in my experience meant only one bird, the Cerulean Warbler. Problem was, it's an east coast bird. Still, it stirred a memory of a similar sighting last year at the pond, so I went to the books. Peterson's Guide to the west coast birds lists the bird as an occasional stray in AZ, CA and WA, so maybe. Then I went to the web. No mention for OR. I went to the Oregon Field Ornithologists site. No mention. So I wrote them. I wrote that I was damn certain of what I saw. Then I went to their bird list. Hmmm, maybe a Blackpoll Warbler. Maybe made a little more sense, but I did not see any olive coloring on the wings. Anyway, you can see my confusion. 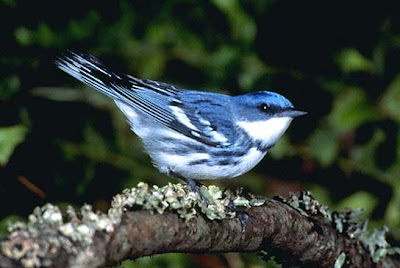 The more I look at the photos, I think I saw the bottom one, the Blackpoll. It's that black head that has be doubting myself. Shame, that. But I've written those people, and they've written back and have shown both doubt and interest. A woman from Salem wants to come out. But first, I'm going to try to get my own photo by the pond.
Posted by bastinptc at 10:18 AM