What I'd like to know is who put out their Pall Mall on our retaining wall? Maybe the guy from across the way with the kid in tow yesterday, looking for Jessica, the kid's playmate of unknown residence. I didn't see them but heard DW talking to them through the window, not one minute after I'd pulled into the drive and walked into the house.  Must've been in the yard already, taking the long way around. Bunch of ex-cons and derelicts, the lot of them are. And you think my grammar is bad.

So we're on Pee-Pee-Pants alert. Sort of the same level as my wonderment at the re-highlighted Russia in my stats. After all, I am a child of that era, and I've never been entirely certain that the morph changed much. Cops get called for a do-mes-tic, the kid ain't all there, Dad's reluctant to come around to the door to officially meet and they're off.  It's not recidivism when it's their culture.

The threat isn't always obvious, that's for sure, and is partly the reason we're getting our well water tested. It's been a few years, and, well, you can never be sure until you do something to be so, at least for the day you take the sample. After that, all bets are off.

But hey, I only bring up the well because I want to show you something. I wanted to show you yesterday but I didn't like the way the photos turned out. Knowing that I'd be back to the same spot today, I took my camera. But things had changed on me. Two days ago there were no cars in the way. So now the shots I took two days ago will have to do. You'll get the idea, but I'm saying the photos could be better. 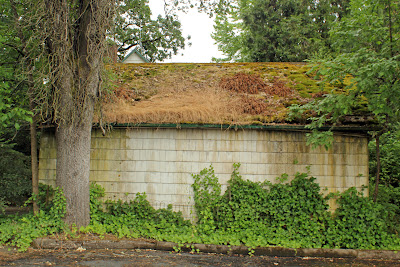 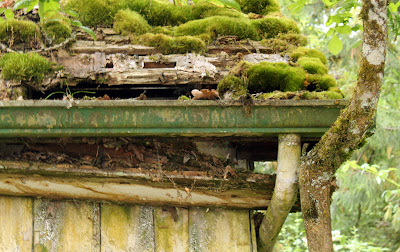 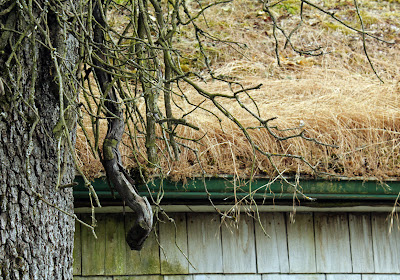 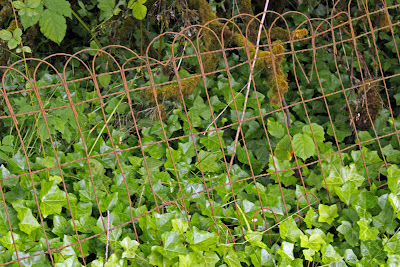 And I thought I'd let our place go to hell the last couple  of years. What I'd like to know is what is holding up that gutter?
Posted by bastinptc at 11:50 PM

Thanks. Don't you know I was thinking of you, Sis, when I took them. The issue I have is the depth of field with the close-ups of the roof.