One more item of business before Las Vegas 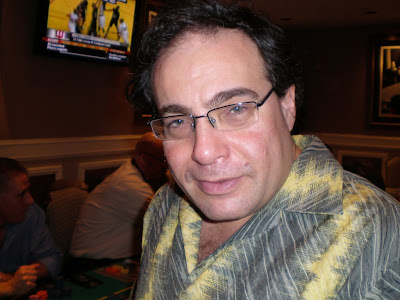 With a little more than a week to go before the trip to Las Vegas for the Poker Academy Meet Up, I cannot help but think about previous trips, and, of course, the organizer of previous Meet Ups, Ben Kramer. I wrote about Ben last August, shortly after his death, and have just reread that post, this after one thing led to another, namely, searching for Ben’s nic in the PA Forums.
Among the many entries Ben had posted, I found this exchange between the two of us from November 2008:
Me: I know that boat is put away for the winter now. Get your ass back to the tables.
To some it may be too early to even think about THIS. For others (like me) we've been thinking about IT since last February. And what I'm thinking is doing IT during March Madness again.
Ben: Yesterday the tarps were put on the boat in the yard. I've been reluctant to admit sailing season is over.
I've been away from PA for the season and been busy, like most Americans (and the rest of the world), worrying about the economy. My concerns about the economy include the questions "Will people be interested in the Vegas Trip this year?" and "How will the economic situation and more people playing with "scared money" effect poker and Vegas?".
For the last few weeks I've been planning on launching a discussion in the private "Rendezvous" discussion group to check on interest levels and dates...
And you should see me at the tables again soon.... been busy.
I do miss all my friends from PA and would love to get together in Vegas to catch-up.
There was some additional chat from previous Meet Up attendees afterwards, but the economy sucked so bad, we decided to put it off for a bit.
I remember seeing Ben at the tables just one more time, which I wrote about last August. But truth be told, I wasn’t at PA much by then either. And now, like a lot of “old timers,” I only drop in for short periods, more just to see who’s there and say hey than play poker.
I cannot help but associate Ben’s death with the demise of the Poker Academy community of yore. Yes, there are still people playing there, and they are making new friends, just as we did four years ago, but the ‘spirit’ of the community has waned, perhaps best evidenced in the Forums. Folks still post a few hands for discussion, and the results of special tourneys get announced, but often the only post on a given day is spam. It wasn’t always this way.
Back in the day, back during the poker boom, the PA Forums were busy. Members had questions and other members had answers. A lot of people were engaged, as many of us were just beginning our poker education. Ben was one of the few members who had been playing poker for a considerable period of time, and he was very generous with his help, usually in the form of a story. You could say “cheese steak sandwich,” and Ben had an anecdote.
Ben: Best way to get razz experience is head to Miami and look for old men, especially old Jewish men, heading for their card game. For many years razz poker was the standard game of the retired and moved to Florida set. I've always believed that after a lifetime of experiences and poker the attitude becomes, "If I spend my whole life getting dealt bad hands, I might as well play a game they might do me some good in!" If you see a bunch of old ladies sitting around playing cribbage, you might want to ask, "So where are your husbands?" After they get over being flattered that you might be hitting on them, they may direct you to where the boys are playing cards.
I must confess, I haven't been to Miami recently, and I haven't been hanging out with the old men (when I lived on the east coast I'd see them during their winter / summer migrations from Miami to NY and back...), so maybe the razz players have died off or made their games less accessible by moving into gated communities.
Ben was also a diplomat, which was a great asset to have both at PAOnline and in Vegas.
This was in reply to a Forum post that to many of us, myself included, appeared to be spam soliciting players to write poker articles in mere minutes (cheaply):
Jonza,
Yes, we do take our poker very seriously here and as a community we are very protective of the forum. I'm glad you can appreciate this and took the time to write a response to our responses and aren't just spamming the site.
On one hand, there are many poker sites out there and a lot of news and information available. On the other hand, you may have some new ideas or have identified things other sites are weak in and may be adding a valuable resource to the poker world. Without knowing anything about you or your site, I'm sure you can understand our skepticism. If you have a site up and running to look at or interesting information (please no sales pitches), I'm sure we would like to learn more.
Finally, because this is turning into a much too long post and I really cannot do justice to the man, I give you two links to the PA Forum. They will give you a better idea of the man as you read the threads.
http://forums.poker-academy.com/viewtopic.php?t=8903&highlight
http://forums.poker-academy.com/viewtopic.php?t=8845&highlight
Ben, we miss you. You better believe I’ll be wearing my PA shirt in Vegas. Not for PA, Buddy, but for you.
Posted by bastinptc at 2:07 PM

Like many PA'ers I first met Ben via the PA Forums and playing online. Two things made me like Ben instantly, first - he was funny and cordial, two traits I admire in people. Second, he was from Chicago, my old hometown. Through PA I learned the Ben liked collecting playing cards, just as I did.

During the first PA meet up, once he had figured out who I was he approached me and presented me with a couple of decks of unique decks of cards.

That's the kind of guy Ben was. Although he had never met me in real life, he was thoughtful enough to bring a total stranger something that I would appreciate. Later in the trip I reciprocated and the following year we also traded cards. I'm going to miss not having anyone to swap cards with this time around.

Peace, Ben. The world is a lesser place without you.

I miss Ben too. He was just plain NICE. I'm glad I got to hang out with him for a few hours when he came to Potomac to visit with his parents.

I didn't know Ben (and sorry about that, he sounds like a great guy), so I'll only comment on the PA forums...

PA forums are dying out because the developers don't take an interest in their users. If the developers don't care about a product, the users go away. A lot of folks feel pretty burned (myself included) by Prospector, which worked for about 3 weeks before FT updated their software, and 6 months later, it still didn't work. It probably doesn't work now, though I have no interest in checking - I moved to HEM.
Anyway... my point is, if the company takes an interest in building a community, that community will stick around and grow.