Much to my chagrin, I have a John Denver song running through my head. It has been stuck there for the last 36 hours; nevertheless, it is good to be back home again.
Yesterday it began to rain and it hasn’t stopped. The pond is overflowing its banks, as is the seasonal stream on the back 10 acres. The dog and I went to scout it out, and when it came time to ford the stream, she reminded me that she is from Southern California where water goes in a bowl and does not flow except from a spigot. A little gentle coaxing found her on the other side, but we still were in a smaller stream running down the hill in front of us. She may not have enjoyed it, but I certainly did.
My readers will be glad to know that I have been able to stow the lip balm that was my constant companion in Vegas, and my extremities have reduced in size and level of discomfort. There is something to be said for humidity in the air.
Since last Monday the Italian Prune tree, the Bartlett and Asian Pear trees, and the Gravenstein Apple tree have bloomed. The grass has grown two inches and the flowering plum trees have dropped all of their blooms. The blueberries are budding up as well.
Las Vegas can be put to bed for a while, but not before one more table.
Saturday morning found me fairly well-rested with four hours of sleep. I had packed the night before so I wouldn’t have to scurry for the 11 o’clock check-out. I checked my bags with the valet, grabbed a bite to eat, and happened to run into Cardgrrl. We said our good-byes and I took a walk to try my hand at photos of — gasp — people.
I then decided to look in on Harrah’s poker room, and what did I see to my delight? A 1/2 table where several players were throwing back shots before noon! I so badly wanted to sit, but had to wait a bit as another table needed players. Eventually, I was sat and watched closely. Opening bets were huge, so I tread lightly. I had to fold AK once but finally came in with pocket sevens against the person I most wanted to be up against, a Hawaiian gentleman who was visibly drunk and aggressive.
He led out for $15, and with two callers behind me, I obliged. Everyone else folded. The flop was 535, he bet $30, two folds, I counted out $70, announced my raise, and he folded. I then watched him play blind to other raises, suck out and amass a sizable stack. Oh, how I wanted a piece of him again, but alas, it was time to leave.
I’ll hold onto the lip balm.
Oh, and a photo from that morning: 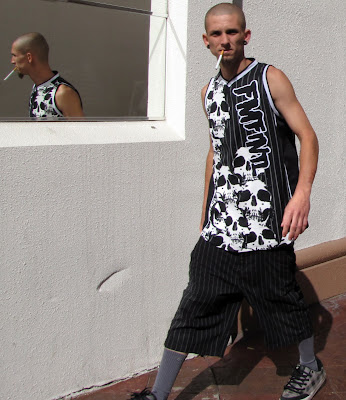 Readers should know that his lips were so dry, that he bought some sort of lithium axle grease in a hardware store to ease his pain.

Don't forget the WD40 to fit into my shoes.

Good to hear you're feeling better. I'm definitely at somewhat of an advantage with the Vegas climate because it's not much different from the Denver climate, altitude excepted. Vegas just feels like a warmer version of home to me.

RE the Hawaiian fellow, it's nice to hear you at least got some of his chips. I absolutely hate sitting at a table with a player like that and never getting the opportunity to thump him. Thankfully guys like that aren't rare and the opportunities will eventually come.

After you spray WD40 on your legs, can you then use duct tape?