Been hangin' with some locals the last couple days. Them and that new farming couple I've written about. We put plastic on a couple 20' x 140' hoop house frames. The first one took us three hours, the second a little over an hour. Both with less than an inch off flush the whole length. Job well done.

In that I was the only one who had done such, although five or six years ago, I acted as the consultant, even though experienced farmers have little problem visualizing and completing such a project just by visualizing and applying various experiences that should run similar. In fact, the elder and father of the young local helped plumb the frame, so all credit rests there.

Had I been asked before the get-go, one frame would have sufficed, for the time being. Without prompting, DW offered the same when she asked me the number. So, there's that.

Now, I did pull the couple aside and those who know better knew to leave to get on with their day. And we talked plants and schedules, for I saw other things that promised ill for what little planning had been made to-date: things in pots that needed more dirt, and an absence of other plants that could be in those new structures in two week's time. While mentioning the former, not wanting to over-burden them, waited until the beginning of this paragraph to leave a message with suggestions for the latter.

More frost and rain is surely in their future, but now they have an edge. They must adjust their thinking accordingly.

There is a slight incline in the field where the two structures are. In a week or so, or so I have offered, I will return with my tractor and tiller. I say 'offered' over the man's insistence that I need not bother, he with similar equipment but of a greater size and faster speed that, in my opinion, leaves him ill-equipped. Cursory versus thorough.

Meanwhile, lest one, me in particular, begin to think I am high and mighty, there is much that needs addressing in my own yard.  A very long list that promises to make for some exceptionally boring blog posts over the next several months. With pictures.

Speaking of which, in route to help yesterday, I came across this small herd of elk just up the road from the young farmers. 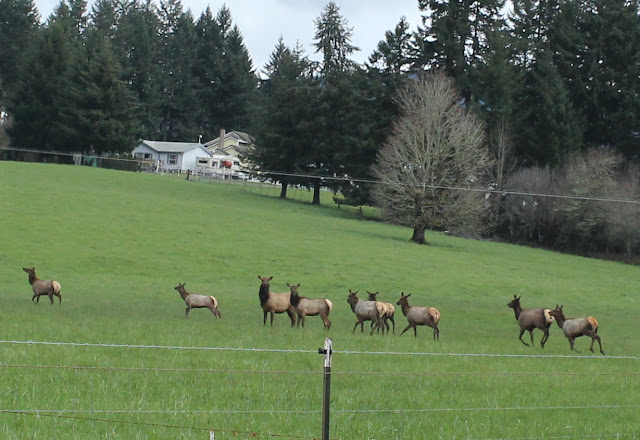 At least the young farmers do not go hungry.
Posted by bastinptc at 4:51 PM

No surprise, the new posts won't be boring to old Crash.
Ahem.....do the new people have a blog?

Are you computing an over/under for this young couple? What's he have behind? Goals? Family in the business? Local's? Market contacts? Small farm organizations? FFA points? County extension contacts?

blog posts over the next several months. With pictures