What you don't know

Not every day has a Eureka moment as the one I had when last I posted. Yet, discovery is possible any day, no? If lucky, answers had; luckier still, questions with promise. Today I will settle for re-venting the dryer.

I was surprised when my cell rang out in the middle of the desert, no town nearby. But in retrospect, the Air Force is also the color of sand (I have neglected to tell you about the drone practice.), so I would imagine my gratitude should go to them, for DW was in some distress.

Our washer ceased spinning shortly before leaving home for my five day stint in Vegas. Of course a repair could not be had that day, and would have to wait until the next week. Of course. During the conversation with Customer Service, an add-on service was offered: Would we like our dryer serviced at the same time? Cleaned and check-pointed for a round sum? Sure, why not?

The service guy had just left. The washer repaired, the dryer cleaned of a sizable wad of lint and yellow dog hair from under the drum, some of it somewhat tanner by its proximity to the heating element. We missed that bullet, and would not have known it was coming. Who knew dutiful removal of lint from the trap after each dry was inadequate? Not I. Never, ever, anywhere. So, we learned something, and it wasn't the hard way. Grateful.

Still, the service guy suggested the vent should be checked as well, and although he did not do that work himself, knew of professionals that did. So alerted, I told DW that I imagined I was proficient enough to do the job once I had a good look at what would be required. It is, after  all, just a length of aluminum hose, and the shop vac has a sufficient length of hose itself to worm through.

Now, we come to a point in the story where a description of the task might be time better spent napping, and were I to write it out, you could return for the conclusion well-rested with an imprint of your keyboard on your cheek. Suffice it to say that much more lint was removed.

Reasonably convinced that the pathway was clear, the dryer was given a test drive. Drying time was reduced by at least one-third and we were duly impressed/relieved.

And despite the smell of dryer moisture, we convinced ourselves that all was well, until one particularly chilly day condensation began to form on the basement walls. The hidden portion of the vent hose was composed of a thin plastic with wire for flexibility and support of a diameter. Plastic that had grown fragile, it seems, for I did not see it behind the build-out. So, this is my day.

I'm off to the hardware store, and a haircut and oil change. I realized yesterday that I had too much of one and not enough (viscosity) of the other.

I have a friend in town I haven't seen in 12 years (well, actually in 36 hours, but aside from the photo below, that is a tale that will stay untold; but rest assured, I learned many things), and she has a exhibition opening tomorrow, so I might remain scarce for a couple more days. 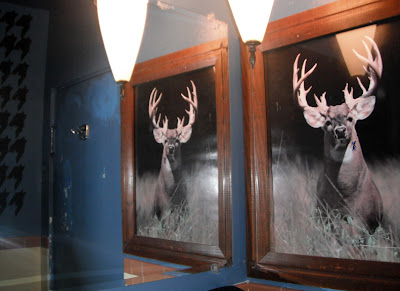 I was told to NEVER use plastic exhaust on a dryer. Nor the crinkly metal kind. Smooth metal all the way.

Now you've got me paranoid about my dryer!

you could return for the conclusion well-rested with an imprint of your keyboard on your cheek.