While in Chicago last week, we evidently missed the worst weather the Northwest has had in 30 years. As I’ve previously written, some evidence was still about upon our return. Even though it was dark when we pulled into the driveway, we could see by headlights that we had lost a couple big branches off of our two filbert (hazelnut to non-Oregonians) trees.

We would have to wait until the next day to see other damage we had: we lost the rest of the Photinia I had tried to save earlier this year. It snapped seven feet up like a sailboat’s mast in big seas, another twenty feet of tree making an isosceles triangle with the ground. We also noticed that a branch had broken away some sixty feet up into our noble fir. In that the branch was not on the ground, we searched the canopy and found what we were looking for: the widow maker. Another big storm will bring it down. The thirty-mile an hour winds today did not accomplish the task. 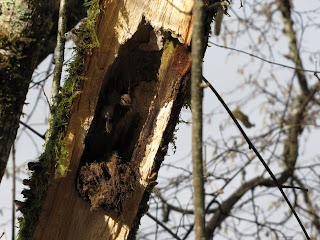 The photo is of one of the filberts. The wind broke it at its weakest point, at an old woodpecker nest. The nest was exposed at the break, yet as one can tell by the number of fungi on the branch, the damage was inevitable. We had no idea that nest had been there, and from the looks of it, it had been vacated many years ago. Spiders had hung their round egg sacks from the ceiling. Fungi shelved the walls. The moss that had been used for bedding had decayed to black.

How strange to just now see it, especially after I had spent so much time thinning out the tree earlier this year. I shouldn’t really be surprised. We have an abundance of nature’s beasts about us, some more obvious than others, like the California Quail we flushed from a wood pile yesterday not 100 feet from our house. We have seen them around the farm for two years, yet we had no idea where they actually lived. I have a potentially great photo of them on film, which I will get processed tomorrow.

I knew immediately that I wanted to photograph the nest. Getting a good shot was another story (I still think I could do better). The weather wouldn’t cooperate, and each time I downloaded pictures, either the lighting was inadequate or water was on the lens. Yet, each time I went out to try a shot, I’d see some other aspect of the scene I had missed the times before

Today the sun finally showed itself for about a half hour at just about 12:30. The angle of light was nearly perfect (it would have been better a half hour earlier).

Tomorrow it is supposed to rain again. The next clear day I will try to get a better photo and then bring out the chainsaw.
Posted by bastinptc at 11:57 PM