Time to take another look 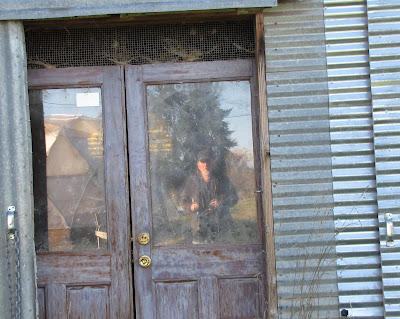 I had a meeting with a young gallery director in Portland yesterday. An impressive young man who graduated from the School of the Art Institute of Chicago at the same time we lived there. His name rang a bell so I thought I’d connect with him to see what he was doing. It turns out he is doing a lot, has his fingers in many pots and has a very nice space to show art. I took him some duck eggs and garlic and left my portfolio at home.

Although we evidently knew some of the same people in Chicago, for he found my old email address in his database, we could not figure out who they were. The inquiry was further complicated by the fact that I have had little contact with the “art world” for the last five years. Names escape me. My dear wife and I had operated a small gallery for a couple years, I had done some guest critiques at SAIC and even taught a class there one semester. I drew almost a complete blank, and those names I could recall went nowhere.

I felt old, and worried that I might be coming across as a little senile. Names were on the tip of my tongue — names, once the pressure was off, I remembered once back in the car driving home, a little too late. I should have done a little homework before going. But then again, I am of the camp that if I don’t see a person with whom I have a short relationship with for another six months, I am under little obligation to remember his or her name. I said as much, and he agreed.

Now that we are not farming, there is no real need for a self-imposed isolation. While still “tied to the land” to some degree, we are able to get away for periods of time and day trips to the city. The young man told me of a great collaborative spirit that makes the Portland art scene happen in ways that were absent in Chicago. I imagine that he is the impetus behind much of it. I wish I had half of his energy and perhaps lived a bit closer.

Although I did not bring anything for him to see, we eventually did get around to discussing my art, or rather, my thoughts about art. I told him how I liken myself to Marcel Duchamp, who removed himself from the art world in order to concentrate on the game of chess. In my case, it was the land and farming, and now, poker that has captured my attention (and to some degree, my imagination). I used to be a rather prolific and prodigious art maker. Now I am content to concentrate on a mere few projects that sometimes take years to fully realize. At this point in the conversation I pulled my ponytail forward and said that my hair, too, was being grown out for a project.

I think he appreciated what I was conveying, for as we were wrapping it up (he was in the middle of installing a show), he asked if I would send him some of my video work. He is establishing a video exchange with a Berlin gallery, and even looking to establish an annex there next year. I told him I would. I have five years of work that only a couple people have seen, and maybe it’s time.
Posted by bastinptc at 2:55 PM

I give up, how did you take the photo with the reflection in the door?