I have a couple pieces in a group art exhibit next month. One piece is the video I Love Art but and the other is an untitled piece, a core sample of the compost pile that I built for the video.

Those of you who have stuck with me longer than a year will remember that I have referenced this ongoing project off and on, and first discussed it (and personal angst about art making in general) here. But if you don’t want to click through to the link, the video basically documents me composting ten years worth of ArtForum and Art in America magazines along with a coyote. In doing so, I am partly referencing a piece by another artist, Joseph Beuys, I Like America, America Likes Me. I’m excited that the work is going to be seen by a larger audience than the few who have taken the time to download the rough cut version on my website. .

Taking the core sample from the compost pile two-plus years after it was constructed was the gallerist’s idea, and to my way of thinking, a brilliant idea at that. However, getting the core sample was not the easiest chore, given what I had to work with. I used a 4-foot long piece of 4-inch schedule 40 PVC that I sharpened on one end while fashioning a handle on the other so I could twist it down into the soil. It took about twelve minutes to drill down a little more than a foot, all of which I videotaped. How well do enameled paper stock magazines compost/decompose? Now I know the answer, but I will leave that as a surprise for the exhibit. The video of the coring will be used as another aspect of the ongoing part of the project.

Another aspect of the project is growing on the pile right now. 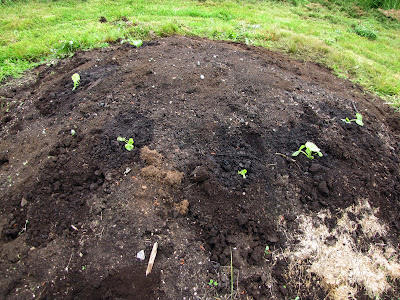 Two different varieties of winter squash volunteered on the pile last year, one Delicata and one Spaghetti (I know I’m repeating myself). Now, six offspring (seeds) from the Delicata are growing on the pile. I actually had a few seedlings come up from the Spaghetti squash but they looked puny and weak, so I culled them for the hardier plant, and hopefully get a good crop of a new squash variety, which will be called the Beuys Winter Squash.
Posted by bastinptc at 5:18 PM

I'd be very cautious about EATING any of your volunteers. I doubt that the color-printed paper makes for a healthy food product. Chockfull of metals and other toxins, I would imagine.

Yeah...too late. Two small Delicatas...didn't really think it would be an issue in that the mags were further down in the pile than the roots went. But the pile has compacted much more since then, so to be on the safe side, we'll just save the seed from the hybrids.