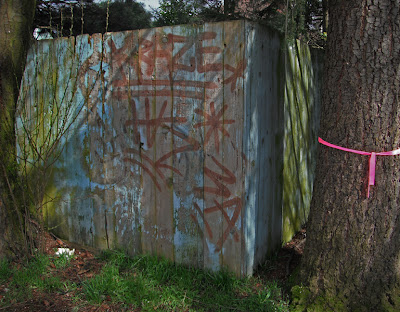 My initial impulse was to post this photo without commentary. That was last night. But I've been doing a lot of posting late at night, either without the advantage of a cuppa or a loosened frontal lobe, and wake the next morning with the nagging feeling that I didn't give my best effort. (In the words of an old roommate of mine and assuming that the beverage contains alcohol, "Never apologize for something you do while drinking.") And now, after retiring early last night, waking and putting away four or five espressos, the photo seems a bit too dark, but I can safely blame that on the google rescrambling or my monitor.

Yet, all of this doesn't explain why I would choose this photo to share.

I am reminded of a second-semester session with my primary adviser in grad school. I had just finished a group of smaller sculpture, some that I have shared here, that now in hindsight, were merely formal exercises, despite the narrative implicit in their materials. Perhaps I was just lazy and irresponsible, for when he asked me to explain the "about,"  I replied, "They're just beautiful. Fucking beautiful." At the time, that was all I was prepared to share, not certain that even he was interested in the fact that the found materials commented on the manufacturing process from whence they came or the societal aspects of their intended usage as end products. Still, my response did little to stimulate further discussion during the hour slotted. And it may not come as a surprise that by the end of that first year, he and the full committee of three overseers suggested that my experimentation without an accompanying discourse indicated that I might be ready to consider removing myself from the program for a while.

Well, that didn't happen. Instead, I quit my full time job in security and took a part-time job in a bookstore. (Kid in a candy store, let me tell you.) I often slept in my studio at school, dropped a couple stones on a dry bagel diet, and fought back with a prodigious body of work that was so rich in a self-contained narrative that it required little explanation. It was accordingly received.

That said, I like the photo.
Posted by bastinptc at 7:49 AM

Five espressos!! I bet you weren't doing that a year ago. Geez. I'd be on the moon. Anyway, great photo.

I think the twigs/branches that are positioned on the left side make your picture better than the original work.

Did you put the pink ribbon there B?

Josie - Thanks. And thanks for the mention on your blog. You're a dear.

Crash - A year ago I would have tried and failed.

Ken - Add to the twigs the shadows and diagonal planks on the receding portion of the fence.

FG - The ribbon may very well indicate the tree is to be removed. Nor did I place the white piece of garbage.

I tried to leave a photo from my phone, but I see it didn't work. I love how the colors work together (even though they are darkish). Good shot.