There wasn't much in the paper, but there rarely is unless one wants to pay through the nose while grief is still fresh. Seems a bit cruel, but then again, early on there's so much more to do than write, unless one is a writer. But I don't know of any others in my family, and finances would prohibit it anyway. So, Uncle Ray got the standard obit with a couple photos thrown in for good measure.

This photo of Ray is the one I remember seeing at his house from my earliest days. He took great pride in his military service during WW II. I should remember better, but I believe he was a gunner in the back end of a bomber.

This is more how I remember Ray: 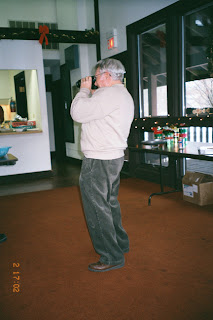 Somewhere in his house is a room, no doubt full, of photos, videotapes and DVDs of family events over the last 50+ years. I can only imagine his camera collection. In later years, he and I would play a little game with each other in that while he was recording the family, I recorded him. I had promised a copy of a compilation but never got around to making it. Somewhere in this dungeon...

Ray loved the family, from his own wife and sin, to his grandkids, to all of his nieces and nephews and their children. It was often said that he was the oldest of us kids, for it was Ray who would play Stratego with the young ones while the adults sat around and yapped. He taught me how to play baseball.

Ray was a diehard St. Louis Cardinal fan. He has a killer vintage baseball card collection. He was a model train enthusiast. When I'd ask him what he'd been up to since the last time I saw him, he say the same thing year after year: "Playing with my trains and burying people." He was part of the American Legion Color Guard, and has been buried alongside his brothers-at-arms.

At 83 years old, Ray was thrown out of the courtroom during the sentencing of the guy who killed my brother. He stood up from his seat, walked up the center aisle and started yelling at the guy. Bully for you, Ray.

Nice tribute to him. The WW II vets were the nuts.

I like him already. Sorry he's gone. Great obit.