Driving in a circle...

We've been hearing a lot of helicopters in the distance the last couple of days. It's time to harvest Christmas trees. I took pictures of the harvest at one farm last year on November 14. I wrote a post about it (and called it the now overused "Field Report"), a special day for me as it was the first day I used my new camera (non-household kitty photos). We had such a gorgeous day Tuesday that after chores were out of the way, I just had to go find the choppers.

I headed North, up into familiar country.  Familiar only to a point, for I passed a graveyard that I had somehow not noticed (or remembered) before. I made a mental note and continued down the road. The grass fields and Christmas trees are often right next to each other at the higher elevations.  It was nice to see the fields once charred, now a lush green. A lot of trees had been tagged for harvest. I scanned the skies for helicopters but saw none. The road I was on, Coon Hollow, empties onto Fern Ridge, which leads back toward the graveyard. That's the circle. 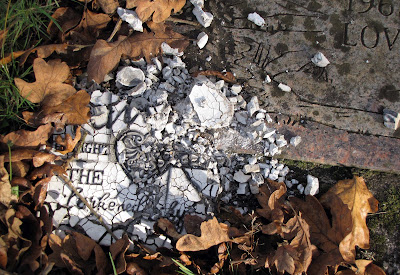 This shattered plaque moved me. It was alongside a marker for a boy of eighteen. And I must say I like the composition of the photo, even though I didn't give it a lot of thought beforehand (more often the case than not). 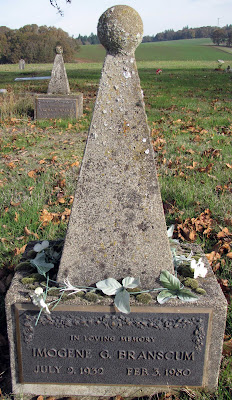 This marker caught my attention right away, as I have never seen one like it elsewhere.  From a distance I guessed it to be much older. And then I saw it's double not twenty feet away. The one in the back is dated 1981. I began to create a little vignette in my head, which I won't share out of reverence for the dead. 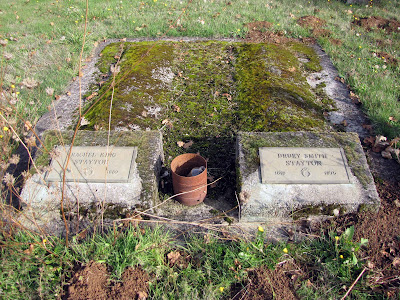 There is a rather sizable cemetery in town that I have no real interest to visit. It's just too big and public for my tastes. But you'd think that's where these two folks would be buried, seeing how the town is named after them. Yes, the founder and his wife. (It's either after him or both of them. I hedged my bets by phrasing my way first and then the way written histories have it.) I find the rusted coffee can and bottle a nice touch. They go well with the gopher mounds. 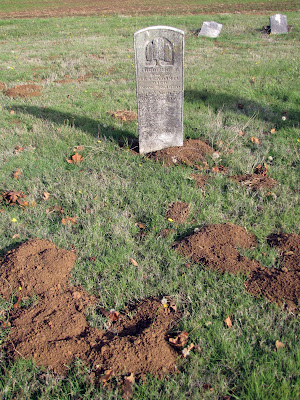 There were quite a few gopher mounds in this cemetery. Gophers are certainly a problem in this area, yet I hadn't seen evidence of them in any other graveyard I have visited.  Again, my mind went off on a tangent: How would one go about getting rid of the gophers? There are traps one can put in their runs, yet that would require digging, and digging in a cemetery seems, well, unseemly, unless to plant something or someone. One can also fill the runs with a mix of propane and oxygen and blast them out... but it is still a little too close to Halloween for me to contemplate waking the dead.

Posted by bastinptc at 8:40 AM

it is still a little too close to Halloween for me to contemplate waking the dead.