So, no, this place isn't home again, nor did we expect it to be, having willingly left six years ago. We had our fill back then, and it doesn't take much to top it off on a return. DW and I both enjoy seeing a few old friends, and then there is family. These are the things that keep s coming back; little else.

We are staying in a neighborhood that is very familiar to us. It is the neighborhood where we lived, met, dated, and fell in love. We ung out in the independently owned coffeeshops, danced until 4 am in the clubs, and ate tamales from the street vendors. But even back then things were changing, and even though we didn't care to face it at the time, our early presence in the neighborhood was bringing about the eventual gentrification. It was a neighborhood artists could afford to rent in, and since artists lived in the neighborhood, it became the hip place to live. The demand made rent prices increase, artists moved out in search of cheap rent, rinse and repeat in the next neighborhood over. Eventually, artists learned that to stop the cycle, they had to beg, borrow and steal enough money for a down payment, buy a building in the next neighborhood, wait for the suits to move into the area,  sell the building to them for five times the original purchase price, and move out of the city with the proceeds. Artists don't make money from art; they make it in real estate. (More on this in the future.)

So, now, instead of five panhandlers on the main six-corners, there's is one. Most of the bodegas and taco stands are gone, as are the druggies and gangbangers. The are replaced by fancy restaurants, valet parking attendants and little combo coffeshop/wine store/green grocers.

The kids needed some groceries today, so I went into one of the latter establishments today. It was three blocks from the place DW and I met. She lived on the second floor, I lived on the third. The neighborhood was run by the Cobras to the north of us, and by the Mob to the south. Both stayed out of each others' way, yet the Cobras had to contend with other gangs, and as a consequence, there was often gunfire right outside of our building. More than once I had to corral my children into my daughter's bedroom, the only room that didn't have windows exposed to the street.

The woman who waited on me today at the store commented on my ball cap. I was wearing my "Dead Guy" hat. "Is that from Rogue Brewing?"

"Well, I suppose there is a little of that left in me. Twenty years ago I lived three blocks north of here." I wanted to reclaim a bit of what used to be.

"Quite a bit different back then."

Yes. Even the graffitti has changed. No more gang symbols or cartoon figures with doobie in hand. The taggers speak to the new residents: 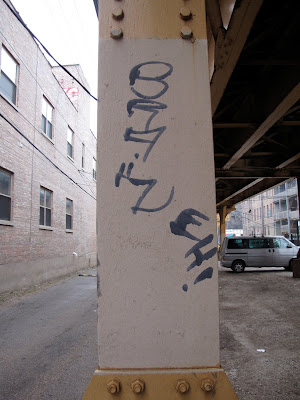 The malaise of entitlement. 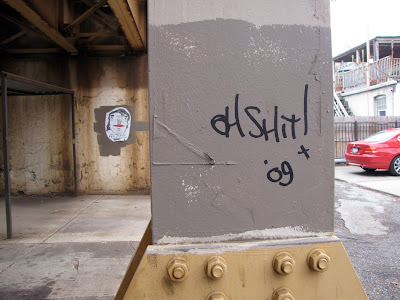 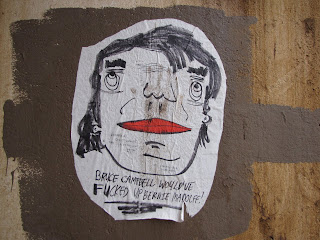 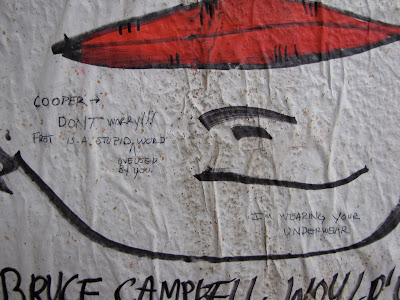 In the old days taggers would write and draw over or rivals work to claim and relcaim territory. Now, they leave comments.

Posted by bastinptc at 5:59 PM

One of your best posts, and I've read them all. Guess I am a sucker for a good love story and econ lesson!

Are those photos the uprights to those "Silent Glider" Els I heard about?

Interesting and thx for the photos.

Is there a university nearby? The Bruce Campbell quote seems student-ish. Are you a fan of Banksy at all?

Damn! The whole 'hood has gone to hell - the educated.

It's hard to explain... there's a certain sense here that came when the neighborhood first started changing. The closest I can come is to describe it as tourism. They stay here, but they don't live here. The shops cater to them, and that makes it seem real.

Lovely post. Manhattan, where I lived, became gentrified and pushed ALL the interesting people out.

But in Vegas the opposite seems to happen a lot - formerly nice neighborhoods get encroached on by drug dealers, gangs etc. and regular folk have to move on.