There’s a wind farm north of Odell. Never been to Odell, nor given it much thought, yet it’s on the map now.

Otherwise the trip downstate from Chicago to see my Dear Mother was much like the hundred or so other trips I have taken on Interstate 55, old US Route 66. Almost like the others. The context had shifted.

Let’s start out trying to explain by noting that I was already in a nostalgic frame of mind, initiated by roaming around a much-changed Windy City, holding a baby boy much like I did twenty-seven years ago, and sitting in a bar for the first time with my now-of-age Dear Daughter. (She asked questions about things that had weighed on both of our minds, and I believe I gave satisfactory answers.) Oh, and Thanksgiving dinner. 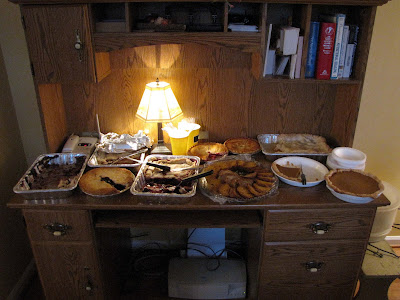 DM makes pies and cobblers. She makes a blackberry cobbler (far left and third from left) like her mother did. That was for Thanksgiving, and I made sure to have two pieces. A pie was waiting for me upon my arrival, a special request: banana/coconut cream. It just makes sense, you know, to combine the two.

“I thought about making a chocolate cream pie too.”

“Maybe a chocolate/banana/coconut cream. That would be the perfect pie.” She wouldn’t buy it, but she will make it for me, I’m almost certain. I’m her son.

We don’t talk about it much, but he’s often on our minds, her other son. The blackberries came from transplants she brought over from his yard to hers. When we eat the cobbler, we think of him. No, he is there.

As I eat the cream pie, she fixes a basket of plastic Christmas flowers. “He probably wouldn’t like all of the fuss.” 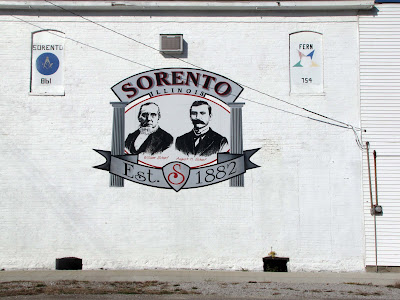 Again, “I wonder what he would think of all of this? Do you suppose he ever thought that his death would have such a devastating effect on so many people?”

“While we may consider our own deaths, I don’t think any of us know how it will effect others. It is too painful to think about. And, as for the flower basket, he would inspect the job I did hanging it and approve of how it is wired to the hook.” We both chuckle. And sniff. 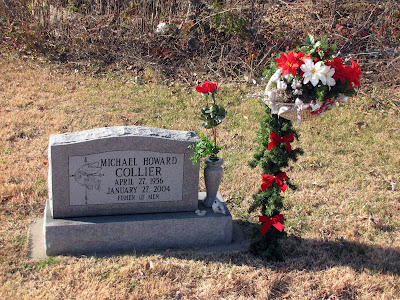 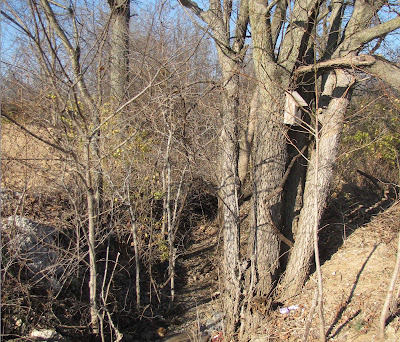 There is a culvert behind the grave. A small woods. We would have explored it as children. Instead, we will lay by it.

The ride back to Chicago was in the dark. When I drove past Odell, all I could see was the red blinking lights atop the mills.

Posted by bastinptc at 1:34 PM

Shaping up to be some trip.

I will say, that pie idea is radical. Even for a favorite son.

But the blueberry, well now.