Some days are just too good. Not that everything goes swimmingly, but the balance gets tilted in the right direction to such a degree that I get, well, giddy. 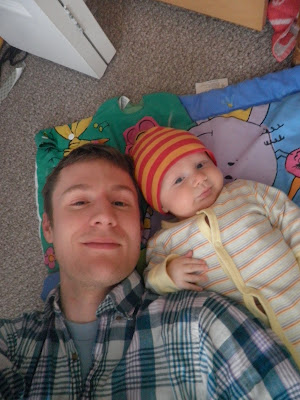 Our DDIL sent us this picture last night. Look at that baby. Is he not the cutest little guy you’ve ever laid eyes on? No matter whether you think so or not, it just warmed my heart so much that I had to share. The DS is a nice lookin’ kid too. Good genes all around.
I have very fond memories of DS when he was the age his own son is. I worked nights at a psychiatric hospital and his mom worked during the day. DS was therefore my responsibility during the majority of the daylight hours. I was there when he first rolled over, crawled, walked and spoke.
I use to have a fair number of pictures of DS, but when his mother and I split up, most of the photos from his youngest years were left behind. Still, I kept photographing him. He was equally photogenic way back then. Someday I’ll have to scan those photos, but for now, I do pull them out once a year or so. And once in a while, the shots will come up in our conversations. They’re icons of sorts. And they’re not bad photos either, given what I was working with: 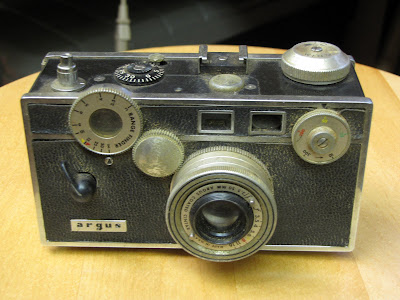 The photos DDIL emailed us had me thinking about those days, and the camera I was using twenty-five years ago, so I dug it out to take a look at it. (I even have the flash attachment.) Poor thing. It’s been in a bottom drawer in my dampish dungeon for six years. And before that, it spent time in a box with a bunch of other old photo stuff in the basement of our place in Chicago. I will see if I can clean it up some.
The camera has a history of basements. It was my father’s camera before it was mine, purchased, I believe, when he was in the Air Force during Korea. At least that’s the story I’ve given the camera. We never talked about it. However, the basement part is true.
My dad, I’m sorry to say, had an erratic, volatile personality. As kids, the five of us learned to cut him a wide berth. The slightest provocation would send him into a frenzied tirade. And something innocuous one day became provocative the next. Therefore, it doesn’t really matter what precipitated his mission to throw everything away that was in storage in our home’s basement. As far as I’m concerned, it just happened. The cellar door was laid open and stuff spewed onto the driveway. It was then I inherited the camera. It wasn’t given to me; I didn’t ask for it; I just took it to my bedroom and put it in a drawer. After all, he didn’t use it. There are no 35mm pictures of us kids.
Now, I realize that readers are unaccustomed to reading accounts of my childhood, and may understand why not. (Mind you, it wasn’t all bad, yet the good moments, by and large, are those that didn’t involve the Old Man.) If you feel uncomfortable reading such disclosures, imagine how I must feel. Still, as personal as this blog may seem at times, a large amount of discretion goes into the pre-edit. But sometimes, like today, when I look at the picture of my son, and his son, and I feel the joy and love that rises within me, so much so that I cannot help but share it, I know that the story is not complete, has no context without a fuller understanding of my own.
Posted by bastinptc at 12:10 AM

That was sad. But, it points out your sterling character shining though. NH WPS

I was lucky I had one of the best dads on the planet. People that worked for him loved him as much as I did.

Great picture of your son and his son. I know how you feel, I have similar pictures of my son with his son.

Yup, totally the opposite to how I was treated.

I have a gleaming old 8mm projector that belonged to my parents in the 1930s. Chrome trim and levers and that crinkly black finish. To this day, there is a distinctive smell of the lubricant. Work of art.