Variance in poker pales in comparison

Snow Peak received a dusting last night. The white is visible above what must be the 2,000 feet and in the areas where the trees have been clear-cut. This is the first snow I’ve seen up there in a couple months. Typically Snow Peak remains covered in snow until early May. Tonight we’re supposed to get some ourselves, here at 875 feet.

Something has been bothering me for well over a week. Our flowering plum trees have been in full bloom for at least that long, and it seems awfully early for such occurrences. 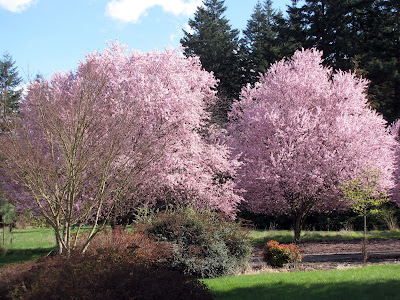 I remember taking pictures of the trees last year and posting them here. How come I remember? Because aside from Grump’s link to my blog last week, that post has been found through google enough to be my second most-read post.
Actually, I posted about the trees twice; once when they were budding, and later in full bloom. The ‘budding’ post was written on March 27. So, yeah, we’re a bit early this year… a month early.
Thing is, the cherry and peach trees are blooming as well and our orchardist friends are not too pleased.  I only saw my first bumblebee of the year this afternoon, a little late to the party, but it might be a moot point. The snow tonight is going to be a problem.
Posted by bastinptc at 2:36 PM

That's a wonderful shot, especially when clicked on to enlarge.

No snow. In fact, I can see the Milky Way. Below freezing temps with no precip might be worse.

Wooow! How long do they bloom for?

J - Second week now. Petals are starting to fall off to make for a pink ground.