In 1993 I traveled to England and Italy. It was a marvelous trip, the first time abroad, and I went alone, which meant that I had ample opportunity to go where I wanted to look and look and look at art. Old art and architecture, which, back in the day, was often one in the same in that older buildings had sculptural reliefs as adornments.  These images stayed with me, and may be one reason why I started working with clay in the first place. As I worked with the clay, it was only late in the game That  tried my hand at reliefs. I saw them as a challenge, but did
few, instead opting for simple wall-mounted sculpture.
Arguably, this phase of the clay work is more decorative than the proceeding. In many respects, they are also more refined. Although lacking features such as a nose, mouth or eyes, the rough-edged approach to making the forms is gone. 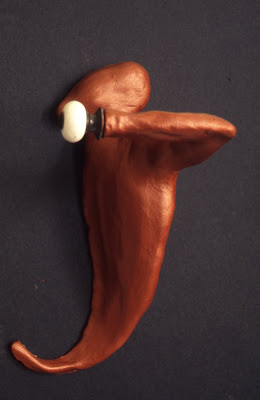 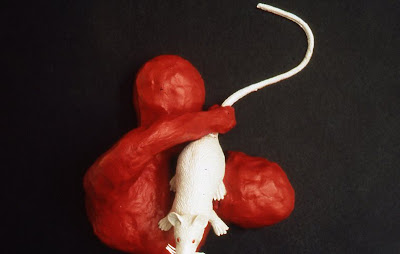 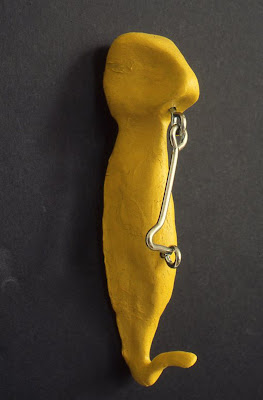 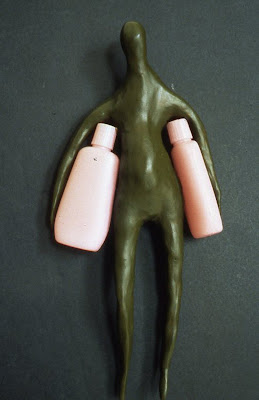 The Doctor Has a Picnic 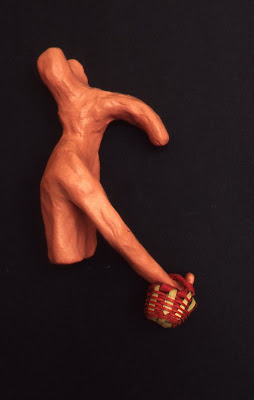 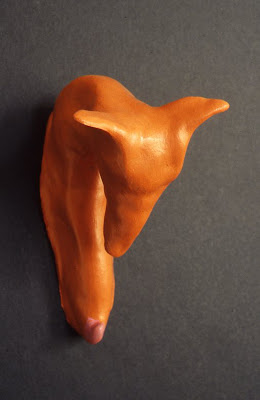 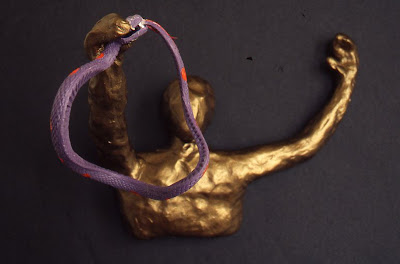 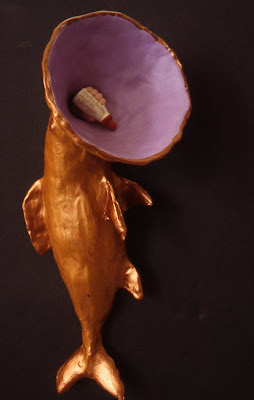 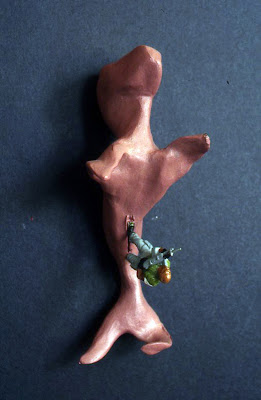 Adaptation
Even so, I still wanted more detail in the clay. It may have been my residual impatience in relation to the small scale in which I was working that kept me away facial features, but something else had caught my attention.
By 1996 my son had moved beyond action figure toys like He Man and the Ninja Turtles. They had been relegated to a box in his room as he moved toward his love of making music. Judging from the toys I recovered from the trash in the alleys, he was not alone in a shift in interests, for I found the same figures, or remnants thereof. I brought them all to the studio and began replicating (with a nod to the artists who made the first models for these toys) the dramatically exaggerated musculature in the arms and legs. 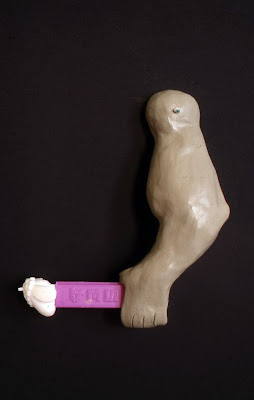 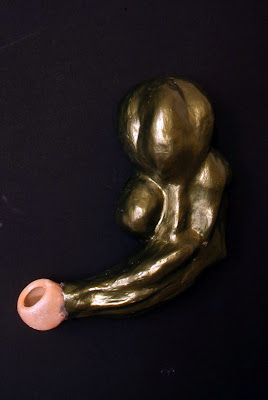 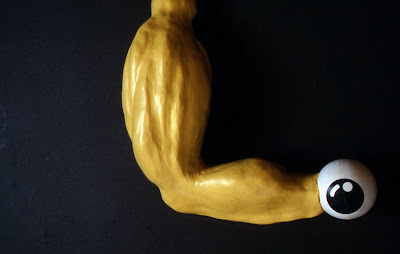 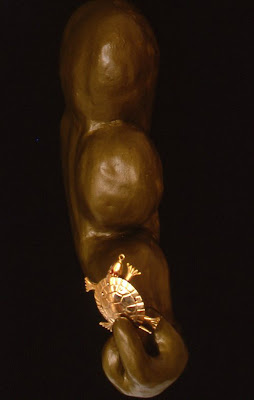 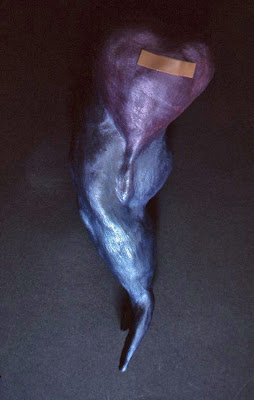 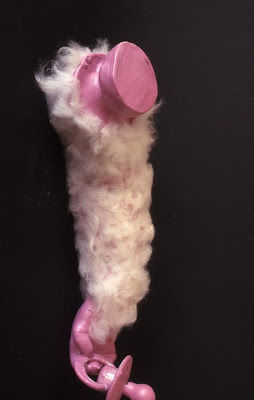 Weaned
I was running out of steam. My life was changing. For a while I thought it would behoove me to work from a live model, and made a few more pieces based on those studies, but my interests were shifting to include installation, photography and video; and while elements of sculpture found a place in these new pursuits, I began to slowly move away from clay.
Somewhere in a room we use for storage I have some clay, just in case I get the urge again. In that same room there are a few boxes of these old clay pieces. I gave the bulk of the work away before we moved from Chicago, and culled others that didn’t make my cut at that particular moment. I am ambivalent about that decision, yet happy that slides of the work still exist.
And I am glad I did this little exercise. It has afforded me an opportunity to assess a period of my art-making in which I was very nearly wholly immersed in the process. As I look back to that time, I am awash in memories, and I have been tempted to share some of those reminisces. However, in some ways I feel like I have already said too much, for I still suffer from that old notion that where my art is concerned, it should be what engages the audience, not I. In the very least, I hope you, dear reader, have found one or two pieces that you have enjoyed, and as always, I thank you for your visit.
Posted by bastinptc at 12:12 AM

The overview helped explain the straight line photo's of the grass lands.

The influence of the "old" European decorative building art is evident in this series and actually added interest to an already interesting collection.

Isolation of objects is, seemingly, a goal of photography, the inclusion of an object in a larger whole was the goal of the "old" building art. None was designed outside the whole, though stood well as works.

For stand alone the Greeks were pretty good at it, and the paintings of mid-ages that have come down to us are usually (out side the portraiture) as studies of the subject inside the environment.

I have like your series, Hoss. Look forward to continuation, but question the series because in this format you are actually writing a small book that would sell. Maybe pay for the March Madness you've planned.

Post Script: The DW is to be commended for cracking the whip on you.