I've held back adding the latest series of photos on my website. I dunno.

There was a time early in my art-making life that I drew a lot. Not dogs or cats or birds. Even though there are a number of such drawings, some that I still have, I am thinking more about pads and pads of newsprint on which I drew nothing but Xs and Os in a variety of configurations (long since thrown out). My purpose was to understand formal, spatial (planar) arrangement. It is a practice I still do from time to time, although the marks are different, perhaps more complex. They may still be rudimentary, yet I derive a certain simple pleasure in them. Some time I'll photograph a few of them and post them.

The new series of photographs follow this practice. I have added "marks" if you will, and in some instances, words that perform the same function of the mark-making practice. I look at the original photo and think of where in that pictorial space I might be able to add a mark to either complete or compliment the image, which is, after all, a series of marks and shapes in itself.

I suppose, at least theoretically, that the practice could be extended to include any and every photo I've even taken, barring a situation in which the result might be 'one stroke too many'. The inverse, of course, is a question of the need for an additional mark in the first place. Shouldn't the photo be able to stand on its own? Is what I'm doing an attempt to rescue as opposed to enhance? Is the formal exercise adequate?

By my own admission, indeed, by the doubt expressed throughout this post, apparently not, for as the series progresses on the page, content and context become important. Initially, the titles handle the load, and the images remain rather abstract; however, toward the end, when scenes and landscape enter, and the words begin to appear in the images, a narrative, and hence meaning, begins to assert itself, which is more involved than considerations of mere formal composition. In that sense, although there are transitional pieces, the work begins to become two distinct bodies of work.

Of course, the marks on the asphalted roads are not without meaning themselves. They are location indicators for the infrastructure that lays underneath. The various colors and the specific marks are a language of their own, and in some cases there is a syntax. All we need is to study the specifics of that language to begin understanding. Without that key, meaning is rudimentary, content-driven: asphalt, manhole covers, and paint markings that sometimes repeat. We recognize the scene, but not much else, and the image begins to abstract out. The title and the additional marks I make are my response, away from the original intended meaning, if you will, of the original image, and I insert meanings of my own, again, more so in the titles than the addition of marks.

I find myself reflecting upon the drawings I mentioned earlier. While promising for later, they insist, and for a reason. 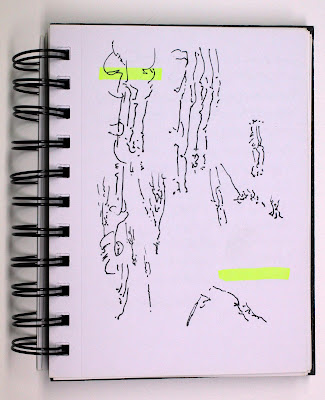 When I make these drawings, I am conscious of my hand's movement. It is similar to the mechanics required for writing. Indeed, I typically work from left to right, and have on occasion filled a page with row after row of calligraphy-like markings. No doubt muscles remember legal pads. And while the marks otherwise and often resemble outlines of a landscape, they retain the basic bare-lined structure of handwriting. In light of remarks I have made above about formal additions of either new marks or word placements in images, it seemed appropriate that were I to try and do the same with these drawings, I should use a yellow hi-liter.

I don't pretend to come to any conclusions about any of these pieces. I suspect that such is far from forthcoming, if ever, as I continue working in this manner. At this point, however, I can offer some explanation that may help both the reader and me toward that end.

You've got a thing for straight lines (no matter how crooked) and intersecting angles. I thought back to the compost pile and the book ends looking for a relief, but the book ends and shelves did the lines and angles bit.

Straight lines and angles, eh? I imagine a subconscious effort to corral/frame the scatterings of my mind.

Grunt. I did the pictures also, Patrick. I liked the ones you kept and the relative arrangement.

The half-relative got a new toy too. You guys are okay, you know that?

I see faces and figures. Rorschach much?