State Fair ribbons for his baked goods year after year. Frequently took his daughters and their friends on camping trips. Worked with stained glass. Could sharpen a knife better than anyone I knew. If something tickled Mike just right, he couldn't stop laughing. As a kid he was known to fall out of his chair with the giggles. 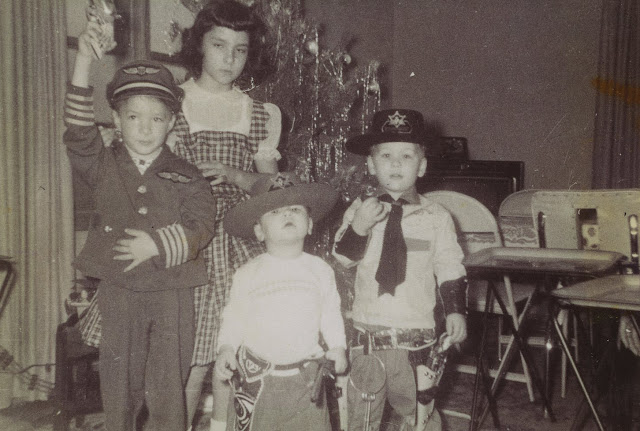 That small guy is Mike. I was older, so I was given the jailer's keys. But I wasn't big enough to take my brother's pistol away from our older cousin. He's dead too, longer than Mike. 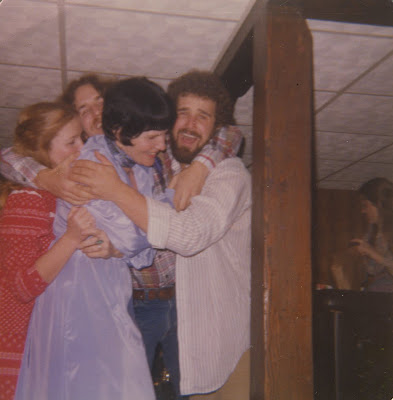 Christmas, I'm guessing 1979. We had this thing we did. We'd save sticky-backed bows from the presents we opened. Then, camera at the ready, we'd stick a bow on the tops of our mother's feet. You'd have to be there. She'd giggle and we'd hug. That's Mike on the right, my youngest sister on the left, and the hippie in back is you-know-who. 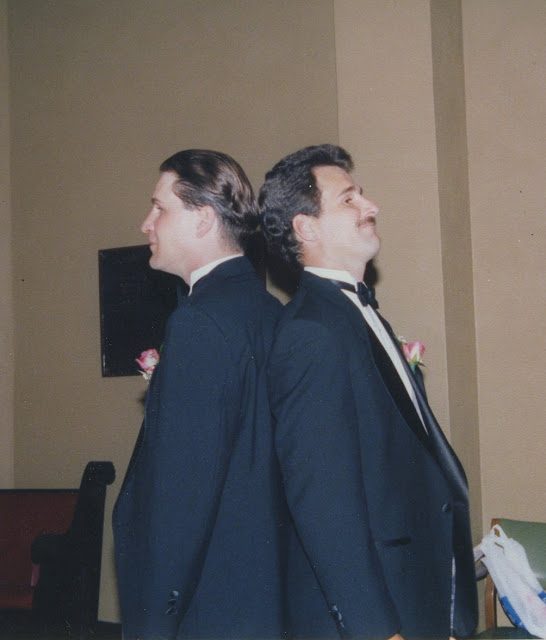 At my oldest sister's wedding. Hands down the most asinine haircut I've ever had. I believe I'm taller though.

Speaking of weddings, I was Mike's Best Man. But this story happened at a bachelor party for a friend I also stood up for: We were drinking pretty heavy. Metaxa. We'd light a shot on fire, blow it out and drink. After several, I decided to try one while still lit. As my mustache burned, Mike used his big mitt-like hands to put my face out, both of us laughing the whole while. That friend is dead too. 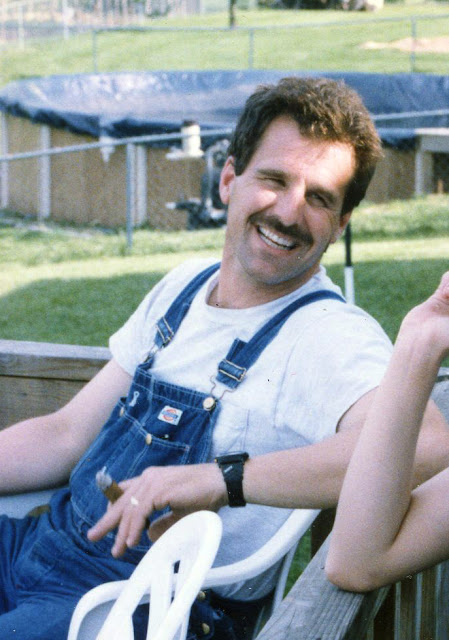 Nice smile, right? The front tooth to your right is capped. We were wrestling in the basement. That dainty arm to the right is DW. This photo was taken not too long after I introduced her to the family. I have cropped her out because she wouldn't have it any other way, but what you might want to know is that in her left hand is the same as that in his. Back in the day, understand. I most likely had a cigar as well. We were sitting there, having a good time, when Mike looks at me and says, "She's a peach!" 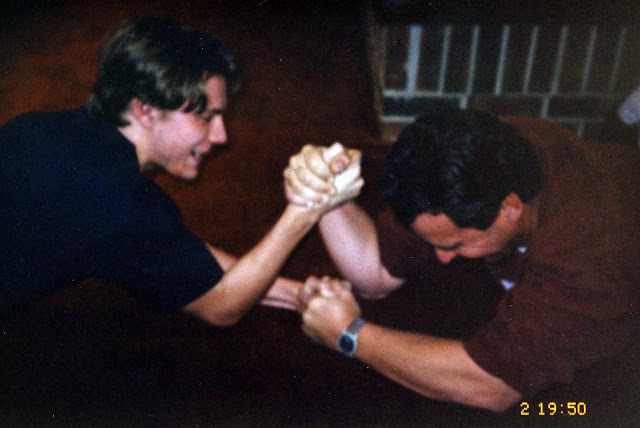 For several years Mike participated in the arm wrestling contest at the State Fair. I do not remember the outcome of this match with my DS, but given the forearms, one can imagine. Not taking anything away from the boy, understand. 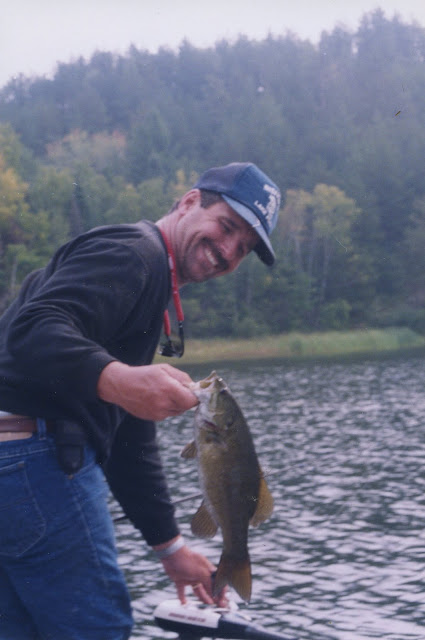 This picture is on our fridge.

Mike had a pond behind his house. He shared it with about fifteen neighbors, but it was his baby, and few others fished it. He stocked it, fed the catfish and monitored the use of fertilizer, herbicides and pesticides. He didn't hesitate to drop in on someone to recommend different approaches to lawn care. Not that he was a greenie, per se, but he did love that pond and knew what it took to maintain a suitable ecosystem for his babies.

The above photo is not from that pond. It is from a trip he, my DS and I took to the border lakes of Minnesota. We had a gas catching Walleyes, Pike and Smallies. This Smallie was caught on a small lake we portaged in to. We carried our battery, trolling motor and fishing gear up and over a sizable hill to an awaiting small V-hull. The fishing was so good, we made the trip twice. I told a story about the trip at the funeral. I made light of his passion for fishing, for it very well could have killed us. Well, the lightening might have.

I want to end this on a positive note; and ending I am, three days of homage and testing the loyalty of a readership quite enough. There are other stories, many without pictures to prompt, all tales that become traditions to keep a memory alive. I would be remiss were I not to mention two new readers, my DD and a DN (niece), who perhaps over these last three days have grown to know an uncle lost too soon to know of the joy he brought to adults as well as children. And, no doubt, they have also learned more about me. As  Mike would say, "This is a good thing." Yet, I wouldn't be writing this at all had that drunk known when to quit. And in that he has still not learned, perhaps another person on that same path will stumble across these posts and begin to reconsider a behavior that can do such irreversible damage and leave a huge fucking hole in this sometimes barely tolerable world. We need every Mike we can get.
Posted by bastinptc at 7:31 PM

What a smile! And obviously a nice guy. I guess one would really need religion to explain what happened to him. Good job, bastin.

Thanks for sharing B - appreciated the tribute and brief view behind the curtains.