Yesterday, despite temperatures in the low 30s, my brother-in-fish, Steve and I went in search of new water. Well, new water for me, in some manner, as Steve had fished the upper parts of this particular river earlier in his adult life, and I, while having driven past the waters to show those impressive sites to out-of-towners, had yet to drop a line in those waters. Rather, that stretch of river, for as Heraclitus cautioned so many years ago, one does not fish the same river twice.

Of course, one does not fish the water at all if one forgets to bring a rod, as Steve was reminded when he opened the back of his rig. A garage full of gear would do him no good this brisk morning. Bait and riggings, check. Pole…left in the rack the night before as he set it aside to offer his DW some assistance with her head cold. I thought to bring an extra rod, but didn’t, for my Ugly Stick has yet to fail as a good, general-purpose pole, and the line is braided, which meant that even should I lose significant yardage in some snaggy mishap, I would still have enough rope to hog in the purported monster trout. So, I alone became familiar with the flow. Steve offered advice on what riggings to use, explored the area and picked up the trash left by those with a penchant for the cheapest of canned beers.

As indicated above, the area is worth seeing, and had I brought a camera, I would show you some pictures I took. Yet, in that my point and shoot is on the fritz and my new camera too shiny for me to take it scrambling over terrain that can find me abruptly (inevitably) seated or sprawled, I will rely on Steve’s iPhone snap. Thanks, buddy. 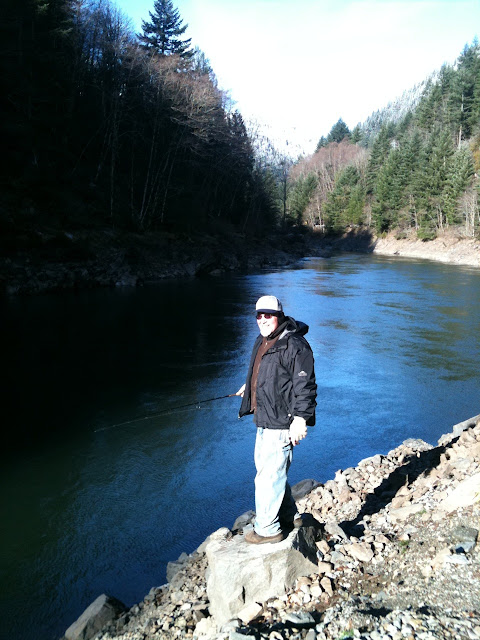 I alternated between shrimp and nightcrawlers as we walked up and down one stretch between the big and small dams. I may have had one nibble, for when I retrieved, my bait was missing. Or it could have been a rock snag, and as the morning progressed, I lost much more than bait on the craggy river bottom and had to re-tie a number of times. Most frustrating.

I admit to frustrating readily in times of snags, rat’s nests and crossed lines, not to mention snapped rods, and had I been alone, I would have been tempted to return home within the first two hours. Steve is made of a different stock and does not let such things affect his passion for the sport. Yet, he also is not insensitive, and likely feeling my growing impatience, suggested we move to a new location, if not to fish, then at least to explore future potential.

One of those places was what he referred to as the cable-crossing hole. It is named such because there is such an apparatus with an enclosure to seat one person. Who uses it is unclear, yet it does have a U.S. Gov’t property sticker attached. I mention the spot only as a transition, for to access that part of the river, one must park on the north side of the highway and cross to the south. As we made our way across the road I became aware of the fact the road was not as dry as it first appeared. In fact, it was coated with a fine layer of ice. This at nearly noon with full sun.

Steve’s all wheel drive had admirably navigated this road with its either sheer or cliff shoulders. I am not so certain ol’ Gert would have done so well, as I had enough difficulty getting from my house to the Park-and-Ride in town. As deceptive as black ice can be, even at 35 mph my rear tires wanted to get to town ahead of the rest of the truck.

Today, the roads promise to be no better, plus there is no sun to warm things up. Still, I will venture forth this evening to the weekly pub poker tourney, for it is not too cold to go swimming.

Beautiful area of the world. Seems worthwhile to visit, even if you catch nothing.

for it is not too cold to go swimming.