Pump up the volume

I went looking for fish today. None were found. My search took me down a riverside path that I had not been on before. As I returned to the car, I saw some potential photos.

I hate to say it, but I am beginning to grow tired of some of the set limits for the camera that has been so good to me these last eleven months. Still, I have yet to discover all that it can do, so I must consider my own shortcoming more than the camera's. But f8 as a maximum? Come on! Yet again, I am far from an expert with the camera and every photo is a learning experience. So, the challenge becomes to work within the parameters I am given with the camera while expanding upon my practice, and not give into frustration.

That said, once home and with the photos downloaded, I was disappointed with many, which is something that has not changed from back before my move to digital. Digital is in the long run cheaper than analog, and inasmuch, liberating, so the disappointment is not as bad as it used to be. Nothing like spending $25 for slide film and processing, just to see that perhaps three out of thirty-six exposures are of a sufficient quality. And then, once scanned and enlarged, only one makes the cut. Photoshop can't fix everything.

What Photoshop can do, however, is make a photo that is in itself rather bland into something hyper-real, providing a forced mood or heightened visual. For instance, the woods in which I shot today are darker than what the camera likes, calculating into the balance a lot of back light, which I find extremely distracting. Tonight, I set out to try and do something about it.

Until recently, I have used Photoshop just to adjust the brightness and contrast, and maybe tweak the saturation levels. Like my photo work, I am far from proficient. Still, slowly but surely I've been exploring more of what the software can do. I didn't document all that I did to the below photos, but I certainly had fun doing it. 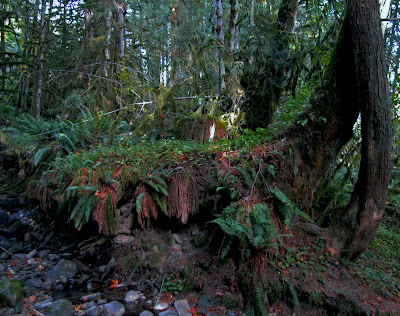 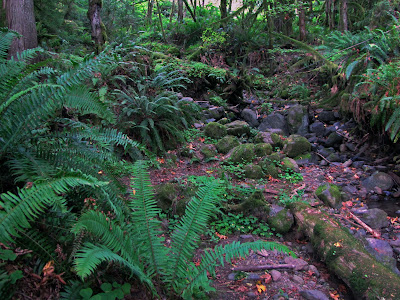 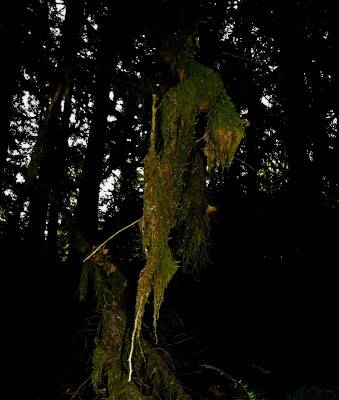 Posted by bastinptc at 8:22 PM

Those are nice and rich in color. Combined with your Goodeye, very enjoyable. Washout of the bright areas in high-contrast photos is a common problem with superzoom cameras like yours and mine. I don't know why.

If your concern is just a backlight issue, your camera may have a backlight situation button or setting to reduce the camera confusion caused by it. Mine has a button, easy to toggle for each photo.

Digital cameras are a challenge. There are a ton of gotchas involved. The emphasis is on pixel count and that's a real bag of worms.

I'm no expert but like the photoshop idea which gives one their own 'dark room' capability.

I'm fairly happy with my "bridge" camera that is fixed lens with fair features and low-intermediate cost. It is a Fuji S1000. Decent size CCD for the pixel count. Has it limits but they all do unless your birth came with a trust account... :)

I got it on sale for just under $200. Nice lens for the bucks. Macro capability might be interesting for you.

When you click to enlarge, the first two really pop out. As Crash said, they are rich in color which you don't notice at first.

"I hate to say it, but I am beginning to grow tired of some of the set limits for the camera"

I have a simple P&S, then upgraded. I'm not sure it was worth the money.

I am getting ready to invest a little:
New Canon G11 ("Prosumer." Ooohhh!) is out soon. Not a superzoom, 5x only. They have cut down the mpixels to 10 from about 15 but kept the same sensor size, improving some of these things. Is also of a more beltable size. Inobtrusive, like MOJO's use of his p&s. Also Photoshop elements 8 is almost ready, so I may follow you into Photoshop. Now, If I only had the Goodeye.

One thing I can say, bastin, is following your work and search for subjects has made me more aware of my surrroundings. Now I don't just go to the store, but look for shots along the way.

Copied from a photo forum. Don't know if it is true:...."about difraction limits for small sensor cameras and that the depth of field at f8 is roughly equivalent to an aperture of f16 (or something like that) for full frame (35mm film size) cameras."