On an early spring day two years ago, DW assisted me on a video entitled “I Like Art but.” The end of the video shows me covering a compost pile with a green tarp. The tarp remained on the compost for the next year.

Due to the decomposition of its components, which were (as one can see in the video) a dead coyote, ten years worth of “ArtForum” and “Art in America” magazines, plus whatever plant matter remained from earlier decomposition, the tarp began to fit less and less snugly on top of the pile. But that soon changed, as it was evident plants were growing underneath. I did not bother to look to see what types of plants had managed to get a foothold, and by the following autumn, the tarp had once again flattened out.

And so the tarp remained, spring returned, and so did plant growth. I removed the tarp to find what appeared to be two squash plants. I had an idea. I watered the plants and they prospered in the fertile soil.

As is often the case with unfenced vegetables, the deer soon found the squash plants and in the course of one night ate them back nearly to the ground. Unwilling to give up on the plants, nor construct a seven-foot high fence around the pile, I instead placed a number of tomato cages around the plants, to no avail. Although the plants began to flourish, eventually the deer were no longer inhibited by the prospect of getting their hooves temporarily caught and returned to dine. My solution was more tomato cages, which did the trick. The picture below is the fruit of that labor. 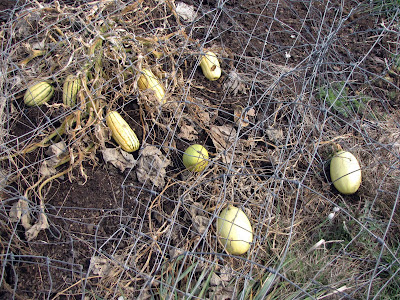 The plants have died back from the cold. One can see squash that were damaged by the deer. Yet, those that remain appear to be two varieties: the ones at the top are Delicatas, and the ones below appear to be Spaghetti. I say “appear” because I cannot be certain. They have the same very subtle linear markings that Spaghetti squash have, and the shape is the same, yet they are much smaller, which may be a “bonsai” effect from the early predation.

If I were to harvest any of these squash, I would choose the Delicatas. We might eat them, despite the fact that they were nurtured by the remains of a coyotes and glossy stock paper. Or we might not. I am, however, going to harvest the seeds from both varieties, as there is sure to have been some cross-pollination. I will plant the seeds next spring and hope to get a hybrid, which I will call the Beuys, in honor of the artist that inspired the initial video.

Posted by bastinptc at 1:03 PM

Farm art.
1. No wonder your back is shot.
2. Such a patient, perfect circle.
3. If you do eat the squash, maybe it will make you even wiser in art, or possibly start to enjoy the taste of rodents.

Three and a half years from beginning to naming.

Not bad. D'Vinci took ten for one picture.