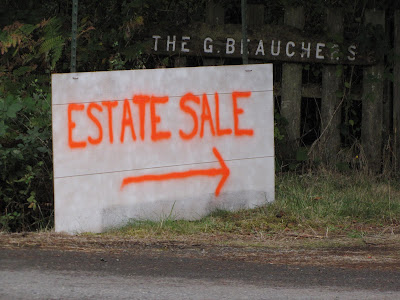 We had wondered for some time. Was the old woman who lived in the woods across the street still alive? We hadn’t seen her in the passenger seat of her daughter’s car, not that we kept an eye out for such things. And although we saw an ambulance pull in there several months ago,  that did not necessarily bode bad. For it was common knowledge that the woman had abused the emergency system on a regular basis. If she couldn’t get a doctor appointment in what she thought a timely manner, a call complaining of shortness of breath would do the trick. So, while we wondered, we didn’t care enough to go ask. We have our reasons.

We first met the woman a few months after moving here. DW had bonded with and rescued a barn cat from certain death, nursing it back to health just enough for it to claw its way through a window screen and escape. It didn’t run far, at least until we tried to recapture it, when it ran across the road into the woods. It was time to meet the neighbors.

There is a very nice, newer home directly across from us. It is back from the road about 100 feet and surrounded by stately firs. At the time, an older couple with a very young son lived there. Nice people; lonely child. They have since moved, and the people who live there now may enter into this tale. We’ll see.

To the east of the new house is contrast. Upon entering the drive, the first thing one sees is an old vacation trailer covered in moss. Across from it, hidden to the road by trees and undergrowth is a shack with double patio doors on the front. No one is inside, yet it looks inhabited. Beyond both of these shelters is a manufactured home (and a kennel, but that is another story), actually more of a single-wide, equally covered in moss as the trailer, but we can hear the sound of a television. We knock and are told that the door is open.

Across from the TV is a couch, and on the couch sit a younger man, perhaps thirty, and a woman who looks to be in her fifties. In front of them is a coffee table. There may have been a beverage on the table, but I keyed into the numerous pill containers, Tops tobacco and the required rolling papers and machine. They had the look of those who had lived with assistance for some time. They did not get up from the couch when we introduced ourselves and told them about the cat. Neither recollected seeing the cat but said they would keep an eye out and use the phone number we provided. They then suggested we pay a visit to the woman further up the lane, the mother of the woman we were speaking to, for the mother was known to feed stray cats, and if the cat was anywhere, it would be around the mother’s front porch. 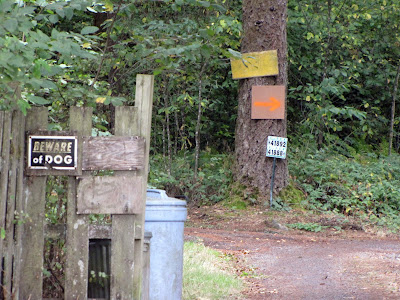 So, off we went, whispering confidences and wondering what lay ahead.

The house was small, brown, and indeed had many bowls of cat food lying about. A woman in her late seventies yelled from inside that she would soon answer the door. Apparently she had to put a pink housecoat on over her pink nightgown. She apologized for not dressing for guests, and no, she had not seen the cat. We gave her the phone number and said good-bye.

Well, we found the cat the next day, returned to where we found it dying. DW took it back to the house and it has rarely left her side in six years. The mother, some two months after the initial meeting called to ask if we found the cat, and we heard nothing more for some time.

As we learned more about our neighborhood, and therefore our neighbors, we discovered that a house further east and on our side of the road, the one that had traffic coming and going at all hours and for short visits, was what we suspected, a popular seller of chicken eggs. No, a meth den. Having lived in more condensed city neighborhoods with gangs dealing drugs around the clock, neither DW or I were pleased with the discovery. We planned for an end to said activity, for tangential events occurred as well. While perhaps entertaining from a distance, a bald woman on one’s front porch in the rain at midnight screaming for one to call the sheriff because she is mad at someone down the road, loses its appeal the second time it happens.

DW, being the conscientious advocate she is, took on the task of organizing a Neighborhood Watch group. She gathered names and addresses of all within a mile’s radius and filled our house one Sunday afternoon with all of those concerned enough to attend. Neighbors across the way included.

As is often the case, I get ahead of myself in the telling. Before the meeting, we had an opportunity to spend time with the daughter, and met the new neighbors in the nice house.  And we became privy to certain things:

The young man sitting on the couch, the daughter’s son, had since gone to jail.

The daughter had met her son’s cellmate, fallen in love and gotten married to this man.

The daughter was bi-polar.

The gentleman who lived in the patio-doored shack the daughter had met while institutionalized.

All of the land on which the building sat was owned by the mother.

The mother had lived there since the mid-seventies.

The husband of the mother was buried on the property.

And the new neighbors, while communicative (the item immediately above this one) and engaging, were raging alcoholics. (I knew that the first time I laid eyes on them.) He abusive, she willing and both in denial has made it so we have nothing to do with them anymore.

Back to the Neighborhood Watch meeting. The mother showed up in vintage Channel, stating she had not been invited to another neighbor’s house in the forty years she had lived on our road. The daughter shared a story about a visit with a friend to the drug house. Needles, a naked quadriplegic. Lovely on all accounts.

I grow weary with the telling. Today is the third day of the sale. We have watched many cars pull in the drive, others slow and then continue down the road. The son is out of jail, and if my memory serves, the new husband due any time, if not already there. They have a new dog, judging from the bark, bigger than the others. We wonder where they buried Mother.

Posted by bastinptc at 6:33 PM

So, will the guys who were in jail be part of the crime watch group?

Well, at least it's not boring around there.