What did I walk into?

Since I had been to two locals country cemeteries, and knew of a third, I couldn't dismiss the last, this one closer to our house than the others. Neighbors' kin. And again, I recognized names, one, a woman still alive just four months ago.

I have determined that I am, after all, not very interested in the markers as structures, ornaments, or sculpture; yet the occasional story that emerges remains intriguing, perhaps for much the same reasons a fiction writer looks to the obits for characters. Uninteresting, that is, unless the carvings suggest something akin to a story.

This particular cemetery is across the road and south about 100 feet from the house of the above recently deceased. Usually there is a car in the drive. Today there were several. An elderly gentleman was out front, heading for the house.

I drove on past and pulled in at the first gate of the cemetery. It was padlocked. I backed out and tried to recall if there was another gate further down. There was, and it was open, even though there was a sign on it that asked visitors to please close the gate when departing. Perhaps someone was inside. There was not. I drove to the back where there was a small structure, a lean-to, with the name of the cemetery on a sign attached to the roof.

No sooner had I gotten out of my truck, another vehicle pulled in. I recognized the car from the nearby house. Whomever it was just sat in the car. I made a show of having a camera and they left shortly. Still, the episode caused me to hurry, to scan, to shoot only what immediately caught my eye.

The other cemeteries did not have buildings in them. I explored these a bit. The lean-too had a map of plots, picnic benches and a table, and an honor box for donations. I fed it a fiver. Next to the lean-to was an outhouse. I took a photo of the exterior. I may have to go back.

Some of the markers were as old as others I had seen elsewhere. And again, there were many loggers buried here, indicated in text and imagery. I took a lot of "maybe" photos, and, as it turns out, a few good ones.

But, I was still hurried, thinking that I had in someway disturbed the people down the road. I did not wish to cause them worry in their mourning. And it was not long before I made a final cursory scan and cut a diagonal back to the rig. And that is when I saw these headstones: 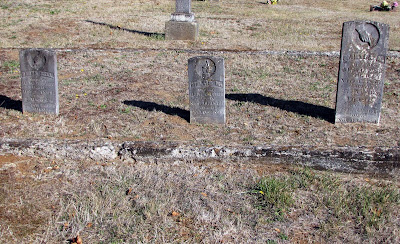 You'll have to enlarge the image to see clearly what I am about to describe. The middle one, the one with the engraved finger pointing skyward, I have seen this image before in the other graveyards. What threw me off was the other two markers. The left one has the finger pointing down and to the left. The right one, down and to the right. Whatever could be the reasons for this? I saw a little dark humor in the arrangement and took the photo. It was only in the processing that I took a closer look.

The marker on the left is for a baby girl, aged 9 months and 8 days, who died in 1869. It also contains information of the death of her fraternal twin brother who must have died shortly after birth. The middle one is for a son, aged 2 years, 11 months and 8 days, who died September 19, 1873. The marker on the right is for the children's mother and an infant son. Did they die at the same time? The date for the infant is clear: November 19, 1874. For the mother, it is less clear. One can readily read a numeral one. Has the nine weathered away? The answer lies in the spacing of the text. There is not enough room for a nine and a comma. The mother died 18 days before the unnamed child.

Tragic for sure. But why the different carvings? And it is not as if they used the same image and just rotated it. The middle one is palm side forward. The other two show the backside of the hand.

I did note the surname when I took the photo. There is a town called Crabtree about fifteen miles southwest of here. I googled it, and Wiki provided:
"The town received its name when the Southern Pacific Railroad came there.[2] Crabtree Creek and Crabtree Lake in Linn County were named for pioneer John J. Crabtree, a native of Virginia, who arrived in the Oregon Country in 1845.[2] He wintered in the Tualatin Plains, then bought the William Packwood Donation Land Claim east of the forks of the Santiam River in the spring in 1846.[2] The station and community were named for John Crabtree's cousin Fletcher Crabtree.[2]"


The same J.J. Crabtree on the markers?  But the timing is off, made abundantly clear here. There is mention of a son, Jasper, still living at home. He is spoken of again here. Yet, in this last link, it is written that he married someone named Ruth. A second marriage?

I find genealogy charts. The deeper I look, the more confusing it gets. The only J.J. Jasper whom is married to to a woman whose first initial is "M" is the old man. His wife was  Malinda. (And even though Wiki has his name as J.J., elsewhere it is J.W.) But lo and behold, they are both buried at Franklin Butte, the Masonic cemetery from a couple week's back.  Searching through more genealogies I find nothing more.

Which brings me back to the hands. I look up "Meaning of headstone symbols" and come up with the same information copied from one site to another. (Ain't that the way?) "Hands" are mentioned, specifically the one pointing up. Well, that's easy. "Hands clasping?" No. "Hand of God chopping?" How odd.

It took me a few minutes. A hand on an angle could very well indicate a chopping motion. And the symbol means a sudden or untimely death. Could be. God has a cuff? Stock engraving. What I find most interesting is that if this is God's hand, why do we see the backside?  Punishment, as in getting the back side of a hand? And the chopping hands are left hands while the pointing one is a right hand. What connotations or speculations can we garner from this? That the infants were not baptized?

I'll tell you what, I'm about burned out on this post. It may be relatively short but I've been at it for four hours. I've made one more swipe at headstone symbols and come up with nothing more. (Out of all of those copycats, you'd think at least one would cite a reference.) So, where I thought there might be something malicious in the choice of hand position seems to be more a matter of convenience. But, I have to say that I'm still not satisfied. And there is the Crabtree reunion website and forum. But for now, I'm just too tired.

Posted by bastinptc at 1:33 AM

i found a reference on flickr to hands on headstones - pointing up = reaching to heaven, pointing down = God reaching down.

here is a thread in a message board that says the same:

Matt - Ha! And how long did it take to find these references? I am sometimes to literal, if you can believe it, and in that the hands weren't pointing directly down (hell, to my mind), I never thought of searching that way. I note that even on flickr they had no photo for the hand pointing down. Some wild graves though, much more elaborate than these country folks'.

MM - "Perseverance" is a euphemism for what exactly?

The internet can be a form a purgatory.