The big news today is the temperature outside. The thermometer reads 71°F, a good fifteen degrees higher than what the prognosticators are still pushing late in the day. Yeah, I know, the rest of the country to the east is in a deep freeze. If it makes you feel any better, the clouds are sitting on the treetops.

Four eggs from the ducks this morning. Two blue and two white. The Ancona (blue) is molting, so I know she’s not putting out. That means the Magpies (white) and two of the older Runners are doing overtime. If memory serves, the same thing happened last year during a warm spell. We now have enough eggs to share with friends.

That’s about it. I mean, there’s more, like the dead squirrel, white fur of its belly up at the head of a curve on the way to town. A tuxedo cat that’s been lying for several days by the side of the road toward the middle of that same bend. There’s fog on the river. The client I had through November seems to have moved on. All stuff not worth belaboring; not here, anyway.

The little ‘puter down in the corner of my screen, usually more than willing to offer advice or performing some sort of transformative dance, is just standing there, sometimes looking at me, otherwise turned to see what I’m writing. I believe he received word from HQ to not waste his time, as I tend to ignore all suggestions. Yeah, I know it’s a f’in’ frag! Agreement? Phooey!

Now I’ve pissed him off. He’s looking away from both me and the screen. OK, OK, the screen and me. He won’t stay mad long.

There is one thing: I’m still working on that art project, the one for “charity.” Here’s the deal:

A local gallery has recruited 100 artists to do something with this here can. 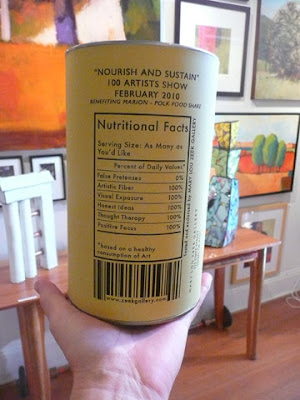 That's the inside of the gallery behind the can. The galley owner's hand, I assume. We’re supposed to transform (recycle) it into art, bring it to her gallery for a big to-do next month, and the proceeds from the sales of those art pieces will go to the local food pantry.

The can has a single dry bean sealed inside. It makes the noise that one bean in a big can would make. Not the same noise all of the time, mind you, depending, of course, on how the can gets moved. And the can itself it capable of producing varied sounds as well, again, depending on how it is struck. Canned music.

“RawCan” is the name of the CD I recorded of these sounds. There are nine tracks in total. Some are minimal, some are polyrhythmic. If I figure out how to embed mp3s into my blog, I will provide a couple samples in the near future. In the meantime, I will provide you with the jewel case art. 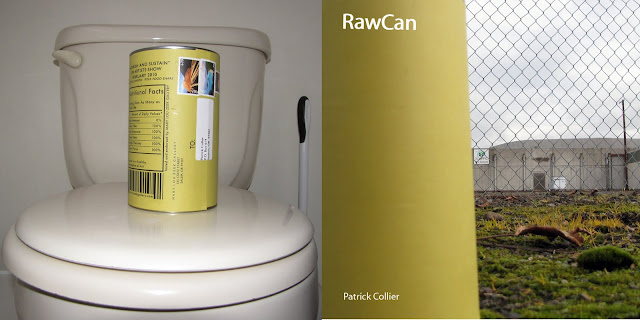 The image on the right is the cover. The printed photo is folded in half so that the image on the left is the inside cover. Get it? Can on the can? Yuk yuk. 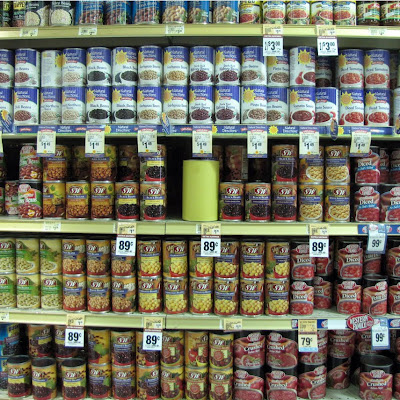 I asked first. I explained what I wanted to do as well as I could to the nice clerk. She said, "Be prepared to get some strange looks," to which I replied, "I am used to it."

Posted by bastinptc at 2:07 PM

Evidentally word verification can write, but has trouble spelling.

Reminds me of warhol or bansky very nice work

All reminiscent of Andy Warhol, but great.

Duck eggs - how are they different from chicken eggs? good to eat?

Thanks for the compliments. I can see the Warhol. Certainly didn't cross my mind at the time. It will be interesting to see if other artists use a more intentional Warhol reference.