The forecast for Friday is rain. Who knows? There's a big low off the coast and a tiny high keeping it there for the time being, giving us sun today, but for how long?

Why the concern? Because I have a model lined up for a photo session Friday. Lighting will again be an issue, yet I hope earlier test shots on cloudy days will help me make good decisions. Today's test shots were more about getting the scenes prepared, finding good angles and trying to figure out some other potential lighting problems. I want to have as much as possible ready to roll for my model, although willing, has expressed some concern for her comfort as she will be unclad in rainy,  50°F weather. I can't say I blame her. 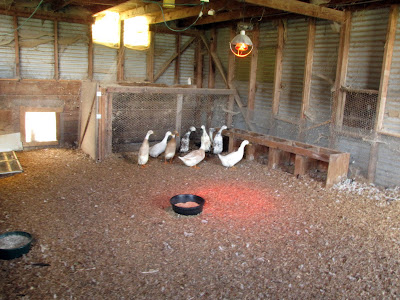 Photos in the duck coop won't be as cold as outside, although not much better. It's dry,  but there is that bird smell to contend with. I foresee a problem with those windows in the back. There is light coming in from a door behind and to the right of the camera, and another door behind and to the left. I may duct tape some black plastic over the outside of the windows. I do, however, like the light of the heat lamp. I will try to use it. And in case you're wondering, the ducks will most likely be present for part of the session. 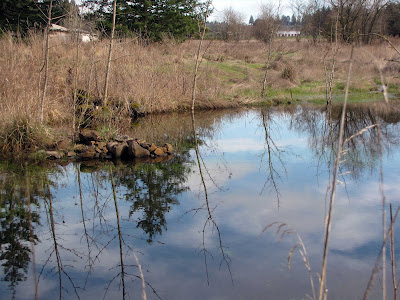 On a nice day like today, the pond shows some potential, especially the reflections. I'm not crazy about the buildings in the background, so I walked the perimeter to find a good frame. I'll have to clear tall grasses out of the shot when shooting straight on; yet I also want to take some photos from atop a ladder, which will not only make the buildings a non-issue, but may also emphasize the reflected body on the water surface. This will be the most pastoral setting of the day, for sure. 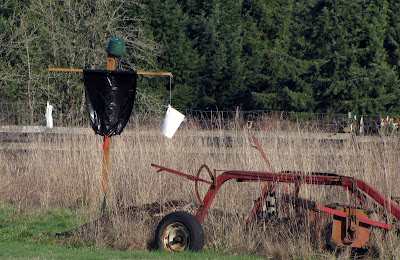 I built the scarecrow today. It is next to the Beuys compost pile, an ongoing project. I will bring the model into the project and see what we come up with.  I took this photo from some distance and like the way the scarecrow and hay rake interact. I am thinking about taking some long-distance shots as a way of subverting the gaze, although I don't know that something this "busy" would be effective for such a photo. I will most likely work at some middle distance when incorporating the compost pile, rake, scarecrow and model. 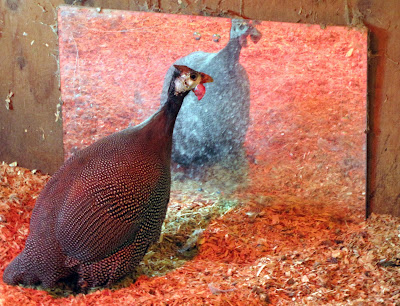 Just for kicks. The heat lamp in the guinea's coop produced the red. Note where his "shadow" blocks the light.
Posted by bastinptc at 2:18 PM

Not meant as a criticism, but the ducks are a bit blurry. Will you be able to avoid that with the model?

Kinda counting on it, Crash. I might shoot at a higher speed to reduce some of the blur when they run, which they will definitely do with folks in their space.

Some duck motion-blur might even be good, but the model should be clear, it would seem. I speak from great artistic experience.

That Guinea is goodness.

GL with your shoot.

My pleasure. E-mail me - furtivenudist@gmail.com.

I have to figure this post out, before I opine.