Before the nude studies, there is an interim photo assignment for the class I am taking. Due this week are photos of my “tribe.” It makes sense. Last week I had to photograph strangers; this week, study someone to whom I am close; and next week another stranger, only this time in what could be considered a very intimate situation if it were not out in front of God and everybody who drives by. (I have contacted a model and am waiting for a response.)

DW, although a tribe member, is out. She’d prefer not, and I’m fine with that. However, I am presented with a bit of a problem: other than that of my family, none of whom live within a thousand miles of me, to what tribe do I belong?

My son and daughter-in-law belong to a tribe. They have a group of friends, both nearby and dispersed, on whom they depend. The group is dependent on the group, giving willingly and freely of time, possessions, and a friendly ear. They barter for goods and services. They crash at each other’s pads when visiting or displaced. When Son and DIL moved back to the States from Hawaii, a friend offered them her spare bedroom, rent-free, until they could get on their feet. The arrangement had no time limit. I have called their group a tribe for some time now, not only because of the above examples, but also because when I met a significant number of the members at their wedding, I was introduced to no less than three shamans.

Still, when faced with naming my own extended tribe, I was temporarily flummoxed. DW and I spend a great deal of time alone, leaving the farm to run errands, see a movie or exhibition, flying to visit family, yet always anxious to return to our cocoon. Not that we don’t have friends here. We go to dinner, chat over the fence, and lend a helping hand when others ask.

They live up the road a piece on Lucinda’s family farm, a 180 acre parcel that was homesteaded by her grandfather at the turn of the last century. Lucinda is also a veterinarian; Cleo is retired from the local cannery. They raise beef cattle, sheep, chickens and goats. They also farm trees for lumber and rent out grass seed fields to another long-time farming family. They are busy, busy women, seemingly always on the brink of exhaustion.

When chores are done of a Sunday morning, they set aside the remainder of the daylight hours to rest. Not this Sunday. They had me as company, and as Lucinda “sat” for me, Cleo prepared a batch of cornbread for me to take home. 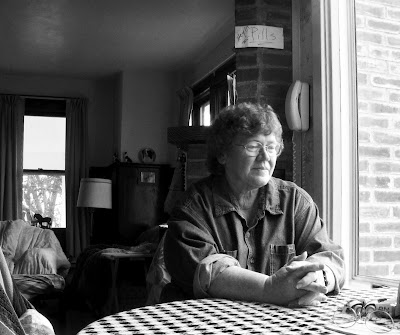 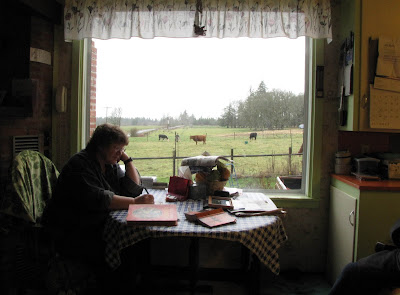 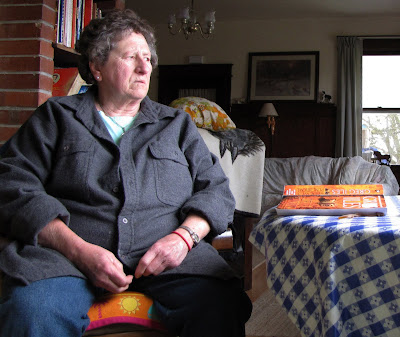 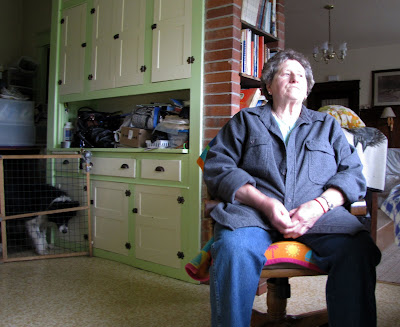 The photo session is one I wish I could do over again; yet, neither they nor I have that kind of time available. The large window was the sole source of light, which, had I been more inclined to direct my subjects as to where they sat in relation to that light, could have been better managed. In this respect I failed to accomplish part of the assignment, which was to consider the light. (But hey, it’s their day off! They don’t need to be bossed around. Not that anyone could anyway.) Often the left side of Lucinda’s face was lost in a glare, and when she looked out the window, as she was wont to do, her glasses made the problem worse. However, she was often still enough for the otherwise low light in the room. On the other hand, Cleo, as is given her nature, is much more animated. In the shots where both are at sitting at the table, there was typically a part of Cleo that was lost in a blur. While I don’t mind presenting such an image, I find a suitable one to be a rare item. If it don’t emote…well, just don’t.

In an attempt to neutralize some of the lighting’s ill effects, I PhotoShopped the images as B&W and played with the tones as best as my rudimentary skills would allow. For the color images, I tweaked (usually lesseneing) the saturation for some of the colors. If I am an amateur photog, I am an even less practiced PShopper.

The most important criteria remain to be evaluated: Did I capture the “essence” of these women? Is there one photo in particular that fully does them justice, or does there need to be? Do the photos work formally? Out of 150 photos, I culled five that might be acceptable to share for the assignment, yet none of them are perfect. I find it interesting that I have excluded photos in which my subjects are smiling. This is more a reflection on me than on them for the visit was wholly enjoyable, and to this extent, I am presenting aspects of my friends. However, farm folks are often a staid bunch, and I do believe I captured that aspect. As for the formal qualities. the last photo is my favorite. The angle, particularly of the large wall of cabinets, pushes Cleo into the foreground and the dog further back into a corner.

more photos of your tribe would consist of your computer, the screen, the mouse, the headphones.

While I like the last one a lot, the middle one does something for me. I see this lady's life from two aspects: withing the house and outside. Nice shot for a situation with awkward lighting.

I agree with Mojo. And perhaps, if you had both ladies in the shot - sitting together but both reading or doing their own thing, lost in their own thoughts or troubles for the day.

Also, i wonder if the lady that chooses to sit within easy reach of the phone says something about her personality. Are they similar or different/opposite personalities?

My favorite is the one by the window - cows in the background, bills to be paid in the foreground.

Yes, I think you caught them.

Be careful with the backgrounds - make sure nothing is "coming out of their heads".